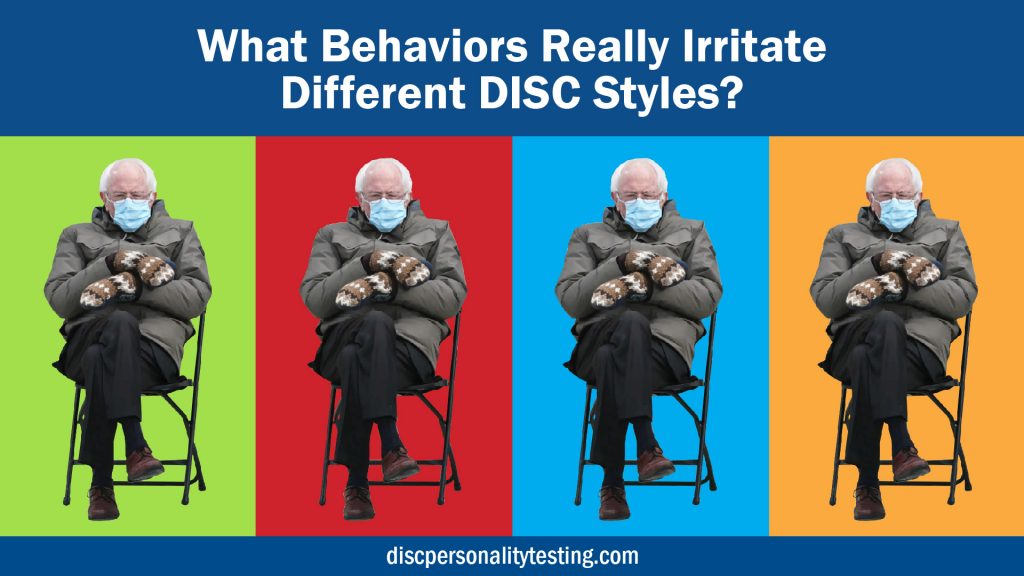 You’ve probably seen some of the memes circulating the internet using Bernie Sanders appearance at last week’s Presidential Inauguration. We thought we’d get in on the act, too.

What’s funny about the Bernie image is that he looks like he would rather be anywhere else but there. Honestly, who can blame him. Sitting outside on a blustery, snowy January day in Washington, D.C. watching the guy who beat me in the primary get sworn in might irritate me a little bit, too.

We’ve all felt like that at times, around people or in places where it’s a Herculean effort not to look like Bernie Sanders does in this moment. That got me to thinking about DISC styles. Not only can they tell us the type of communication styles people prefer, but we can also infer what sorts of communication and behaviors really get under their skin.

Assuming our goal isn’t to intentionally irritate other people, let’s take a look at some behaviors that we need to avoid when interacting with different DISC styles.

People with the Dominant DISC style don’t like to hem and haw or deliberate unnecessarily. When it comes to decisions, they want to find out the information and move forward. So “fence sitting” (or communication that’s interpreted that way) is something that really bothers those with a D style.

On a similar note, while D’s aren’t going to fly by the seat of their pants, they don’t need a mountain of information to reach a decision. What someone else might think is prudence or “appropriate caution” will probably be seen as an unnecessary delay by the D. D’s are ready for action, not “analysis paralysis.”

You can also overload I’s with too much detail, but they’re bothered for a different reason. They’re not necessarily in a hurry for action. Instead, people with the I style value flexibility, and too much data or analysis starts to look like being too rigid or rules-oriented.

I’s are focused on the bigger concept, not necessarily the underlying details. If you come to a meeting with an I armed with mountains of spreadsheets and data, they’re going to get irritated because they feel like you’ve lost sight of the big picture, or you’re “majoring in minors.”

People with the S style can often butt heads with D’s when it comes to decision-making. That’s because S-style people get a little edgy when they perceive things are being rushed. S’s value the relational aspect of the decision-making process and can feel like that’s being short-changed if someone else starts to dominate the meeting. That’s especially the case if voices start to get raised and there’s the appearance of conflict.

If you’re a D or an I and on a decision-making team with an S, make sure your need to move forward doesn’t negate the S’s need for everyone to be heard. Asking some simple “check-in” questions like “Is everyone comfortable if we move on to the next point?” or “Any feedback before we move forward?” can be very valuable and helpful. Likewise, the S style might preface clarifying questions with “Before we move on” or “Just a quick observation before we go forward” to let the D’s know that you’re not trying to slow down the process.

It’s usually the I’s that irritate the C’s in a deliberative process. C’s want all  the information available, and if there’s an agenda that’s been set, they want it followed to the letter. Those with the C style get really jumpy when steps get skipped or if they perceive important information is being left out. For the C, the concept can be the greatest thing since sliced bread, but if you don’t give them all the underlying reasons why it will work, they’re going to be unhappy.

Guy Harris, our resident expert and epitome of a C, tells the story early in his career as an engineer of an enthusiastic colleague from marketing who bounded into his office, excited about a new idea. First, one never “bounds” into a C-style person’s office. Second, this person came with only the big-picture concept. Amazing as it might have been, he provided nothing that Guy needed. Conversely, Guy’s probing questions came off as a wet blanket to this overly enthusiastic I-style from marketing.

As you can probably see, we quite commonly irritate each other unintentionally because of the different ways we look at the world. That’s one of the core reasons why we teach DISC. We believe that when teams become more aware of their own needs and those of their teammates, these unnecessary conflicts can be averted. And when that happens, more projects reach the finish line successfully instead of getting bogged down with personal conflicts.

You can start your pathway toward that understanding by taking your free DISC test. And if you really want to dig deep, take the full DISC assessment here.

If you've taken either registered for an account with our free assessment or took a paid DISC assessment, you'll be able to retrieve your downloadable … END_OF_DOCUMENT_TOKEN_TO_BE_REPLACED

https://youtu.be/0vC_M82o6m8?rel=0&showinfo=0 In this post, we'd like to discuss a question we wish we would get asked more frequently. How … END_OF_DOCUMENT_TOKEN_TO_BE_REPLACED