You are here: Home / DISC Examples / DISC Styles on The Voice 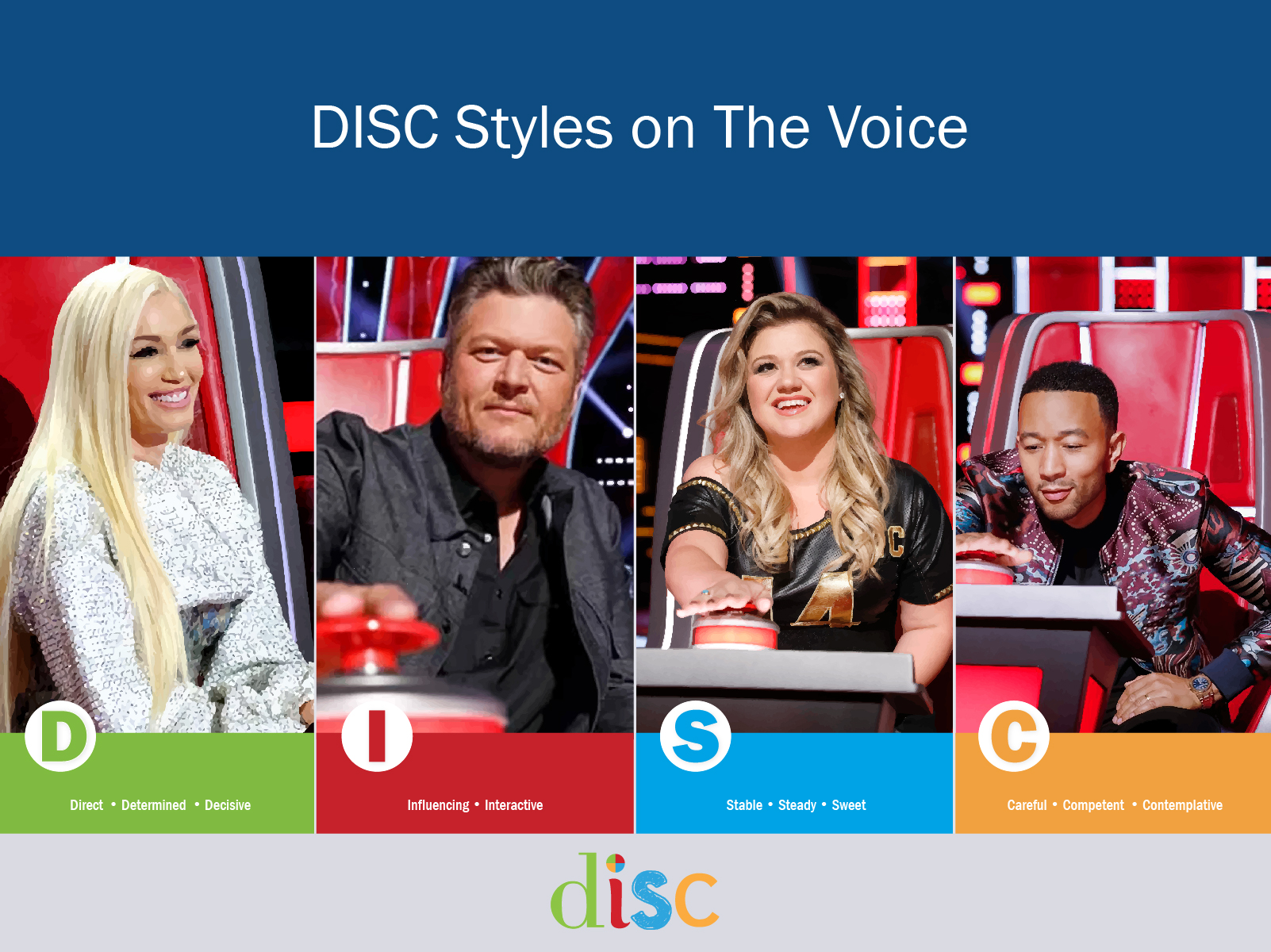 We’re headed back to reality TV for our next analysis of DISC styles. But rather than look at “real” people playing caricatures like with Tiger King, we’re going to look at a set of celebrities who have successful lives and careers outside of the platform NBC offers them. We’re going to take a look at the celebrity coaches on The Voice.

The Voice has been one of the most successful shows over the past decade. It took the hugely popular “talent show” idea from American Idol and added the element of having four successful singers select and coach their team of contestants all the way through until a champion is declared. The Voice is now in its 18th season since 2011, and while the coaches have varied, its popularity shows no sign of stopping.

I put these two together even though their time on the show together was very limited. In only three seasons were Gwen and Adam both coaches. What’s interesting is that in addition to sharing personality qualities (both are very outgoing and direct and tend to be more aggressive and overtly competitive while fighting for contestants during the early rounds), they are both strongly linked to Blake Shelton.

Adam and Blake were the chief rivals on the show for all of Adam’s 16 seasons. How much of their competitive animosity was “for show” is unknown, but they are certainly a contrast in styles. That makes the fact that Gwen and Blake eventually married each other all the more ironic.

In contrast to Adam’s often over-the-top aggressiveness, Blake’s more laid-back “country” style is certainly a contrast. But Blake is no shrinking violet. He plays to win, but does so by inspiring his team members in his own folksy manner. Whereas Adam coaches almost as a force of will, Blake is more likely to deliver a pep talk that gets the competitor’s attention and motivates them to try a new genre or extend themselves in some way.

Kelly ironically came to fame as a winner on American Idol. Now she’s coaching those who would seek to imitate her rise to stardom. She provides great balance among the judges, often allowing her sense of humor to ease tensions when things get a little too competitive. She is more outwardly supportive of other team’s competitors than any of the other judges. She keeps up this role filled previously by Alicia Keys and Jennifer Hudson

While the other coaches might be trading barbs at one another (especially Blake and Adam!) John quietly takes in each performer and carefully figures out which ones might be the best fit for his team. As other coaches jump at offering places on their team, John is usually the last to complete his roster. He takes care to select a broad selection of styles, not just those who fit into his skill set. John is in his third season of coaching and continues on in the shoes of other “C” coaches like Pharrell Williams and Usher.

That’s our look at the coaches from The Voice. What do you think? Can you think of any other judges that we didn’t mention and what their styles would be? Miley Cyrus? CeeLo? Nick Jonas? Let us know what you think in the comments and on social media.

If you've taken either registered for an account with our free assessment or took a paid DISC assessment, you'll be able to retrieve your downloadable … END_OF_DOCUMENT_TOKEN_TO_BE_REPLACED

https://youtu.be/0vC_M82o6m8?rel=0&showinfo=0 In this post, we'd like to discuss a question we wish we would get asked more frequently. How … END_OF_DOCUMENT_TOKEN_TO_BE_REPLACED