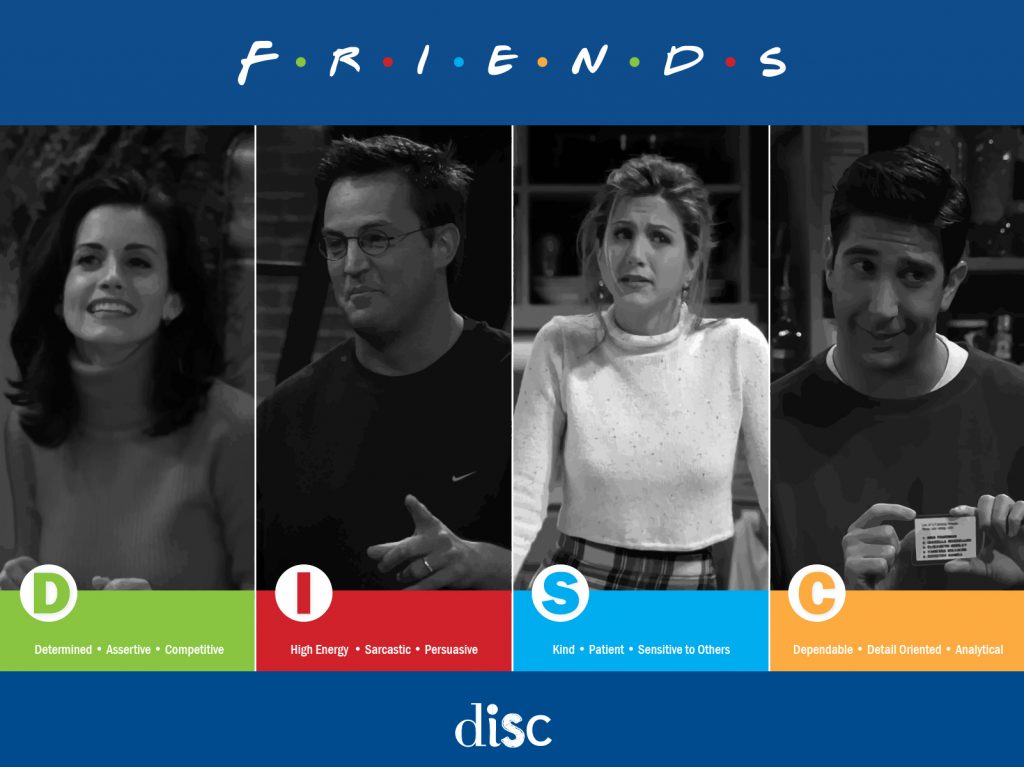 Friends is one of the most successful shows in television history. A big reason for the show’s 10 season run of success and now over a decade of popularity in syndication in streaming is the way the audience connected with the cast. Few shows allowed us to see ourselves the way the Central Perk crew did.

For that reason, Friends lends itself well to DISC analysis. Each of the four styles is clearly represented (with some overlap and style blending) in the show’s ensemble. Here’s who we picked for each of the DISC styles:

Monica likes to be in control. She doesn’t necessarily want to be a bossy-pants, but she craves and thrives on order. We often see her actions as succinct and determined (particularly about the way she likes to see things happen).  She has as many recipes for goal achievement as she does dishes for her restaurant. “Mon” is THE get-it-done girl. She is assertive and will delegate as-needed. Rarely are her opinions stifled, and she has no qualms about taking things into her own hands when her friends are being scattered and childish.  She is exceptionally competitive and loathes losing.

Monica is the younger sibling of Ross; however, her behavior more closely resembles most first-borns. It is clear that she has been organizing and setting plans into motion her entire life. Monica is the head chef at Allessandros, and she rises to every occasion.  She doesn’t deal with excuses – only task success and completion.

Can he be any more persuasive?  Chandler is always high energy, sailing across the hall and bounding into the next apartment. He’s usually relaying a story, idea, or experience using every ounce of that energy and his full body for expressiveness.  He is the “big picture” thinker of the group, often helping his friends (especially Joey) make better choices by sharing that macro view with them. Chandler’s sarcasm is one of his hallmarks – he’s snarky, comical, and light-hearted.  Of the three guys, Chandler’s choices are fueled by his need to be liked than to be right.

Rachel is the ultimate in harmony, love, peace, and rainbows.  Her lack of confrontational-spirit enables her roommates to do what they do best: Monica to keep control, and Phoebe, well…  to be Phoebe! She loves routine (who else wears “The Rachel” season after season after season!?) Although she can be feisty, Rachael is reliably kind, gentle, and patient.  She is often found asking how others would like her to do things. This is not because she is lacking in ideas; it is because she is sensitive to her friends’ feelings, wants, and needs.

As a paleontologist, Ross is pretty much convinced that if he were living in the Jurassic Period, his keen awareness of the entire list of potential devastating factors would have definitely saved all the dinosaurs.  His careful analysis of possible scenarios, focus on facts, and passion for details are what makes Ross such a lovable friend. Ross has to work really hard at blending in with society. Compared to his roommates, Joey and Chandler, Ross is not very expressive in his conversations – even when it is something that excites and motivates him.  His monotone delivery almost allows you to see and hear his logical wheels turning inside his head. Like his sister, Monica, he prefers order and structure in the way that tasks should be accomplished. PIVOT!

So what did you think? Did we get it right? What about you? Which of the characters do you most resemble? Let us know and share your thoughts with us here and on our social media channels. To get a better estimate of your own DISC style blend, take our free disc assessment here.

If you've taken either registered for an account with our free assessment or took a paid DISC assessment, you'll be able to retrieve your downloadable … END_OF_DOCUMENT_TOKEN_TO_BE_REPLACED

https://youtu.be/0vC_M82o6m8?rel=0&showinfo=0 In this post, we'd like to discuss a question we wish we would get asked more frequently. How … END_OF_DOCUMENT_TOKEN_TO_BE_REPLACED