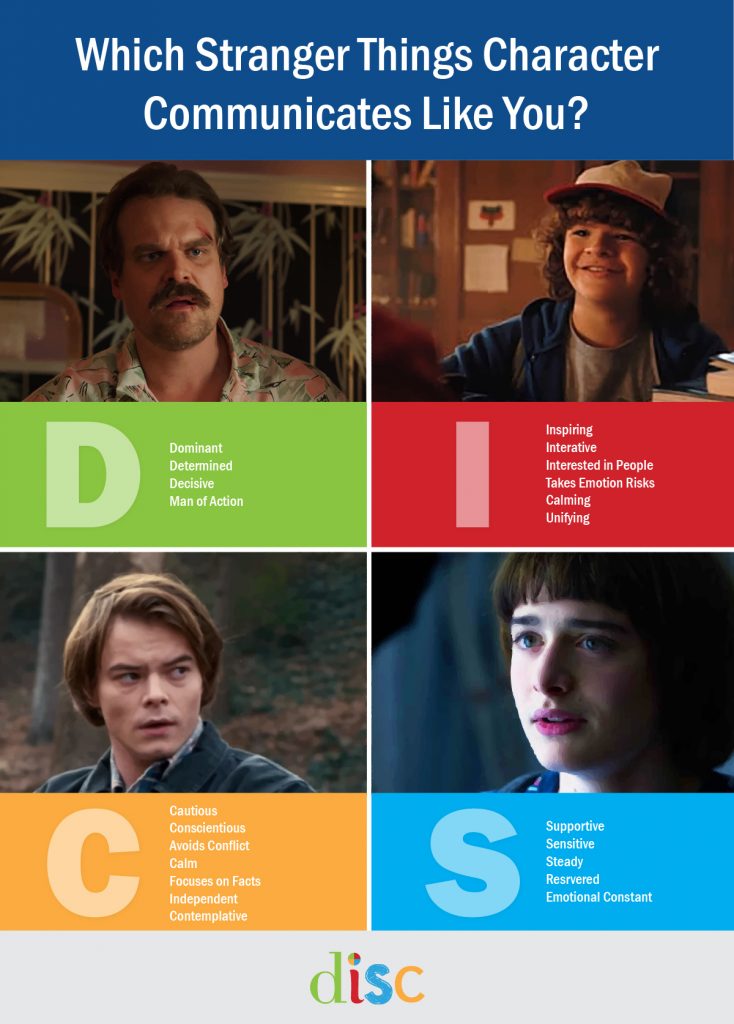 In this installment, we’re focusing on another hugely popular Netflix property, Stranger Things. This show’s ensemble offers us a fascinating mixture of characters with a wide range of ages and developmental levels. The Duffer Brothers do an excellent job of building characters who change and grow. That makes it harder to define them in terms of DISC style, but also is a more accurate representation of how DISC works in the “real world.” Few of us fit into one tidy category, and we don’t tend to stay there in every situation or life period.

Let’s take a look at some of the residents of Hawkins, Indiana. (Warning…Spoilers ahead!):

“Hop” is a man of action. Whether he’s trying to solve the mystery of why Merrill’s pumpkins are rotting or creating some boundaries for Mike and Eleven’s young love, Hop doesn’t ask for permission to move forward. We see Hop’s decisiveness pay dividends as the group battles through the fear and levels of conspiracy that threaten to destroy them and Hawkins. On the other hand, there are times when he could use a little more patience and tact (which Joyce tries to help him with).

Of the four boys comprising the core peer group that serves as the basis for the show, Dustin is the one most willing and able to interact with the “outside world.” Individually and as a group, they understandably insulate themselves as a defense mechanism against being teased by the “cool kids.” It’s Dustin, however, who’s able to connect with Steve Harrington. Out of all the boys, Dustin is the most willing to open himself up and take emotional risks (such as disclosing his long-distance girlfriend, Suzie). It’s that courage that makes Dustin a unifying and calming force when circumstances get the most anxious.

In the three seasons of the show, the boys go through many transitions. It’s Will who’s the glue that holds them together. By far the most reserved of the group, “Will the Wise” is an emotional constant for the group. When all the other members of the party are exploring so many other directions, it’s Will who brings them back together. That’s why saving him is such a focal point of the first two seasons. Will’s emotional steadiness is an anchor for the group.

Will’s older brother shares many of his traits, but is more of a loner. He likes to keep his head down and avoid conflict whenever possible. When Will’s disappearance sends everyone around him into an emotional frenzy (especially his mom, Joyce), it’s Jonathan’s ability to remain calm and focus on the facts that helps them eventually solve the mystery and save Will. Jonathan evolves perhaps more than any other character during the show’s three seasons so far. He definitely opens himself up more, but at his core, he remains very independent and contemplative.

This analysis focuses on the primary style of each character. As mentioned above, in reality, most people exhibit a blend of the four DISC traits to create a style blend. So, you will probably relate to two or more of the characters to at least some degree. The one that best describes you is probably your primary trait.

Which of these four Stranger Things characters do you best understand and relate to? While it’s not always true, their primary trait is probably your primary trait.

To get a better estimate of your style blend, take our free disc assessment here.

What do you think of this analysis? Are there any that you would change? Of course there are so many other characters we could look at. What about Mike and Lucas? Joyce? Max? How about Eleven? How do her unique powers and limited ability to communicate impact her DISC style? As always share your thoughts with us here and on our social media channels.

If you've taken either registered for an account with our free assessment or took a paid DISC assessment, you'll be able to retrieve your downloadable … END_OF_DOCUMENT_TOKEN_TO_BE_REPLACED

https://youtu.be/0vC_M82o6m8?rel=0&showinfo=0 In this post, we'd like to discuss a question we wish we would get asked more frequently. How … END_OF_DOCUMENT_TOKEN_TO_BE_REPLACED