You are here: Home / DISC Examples / The Supportive Traits of Mister Rogers 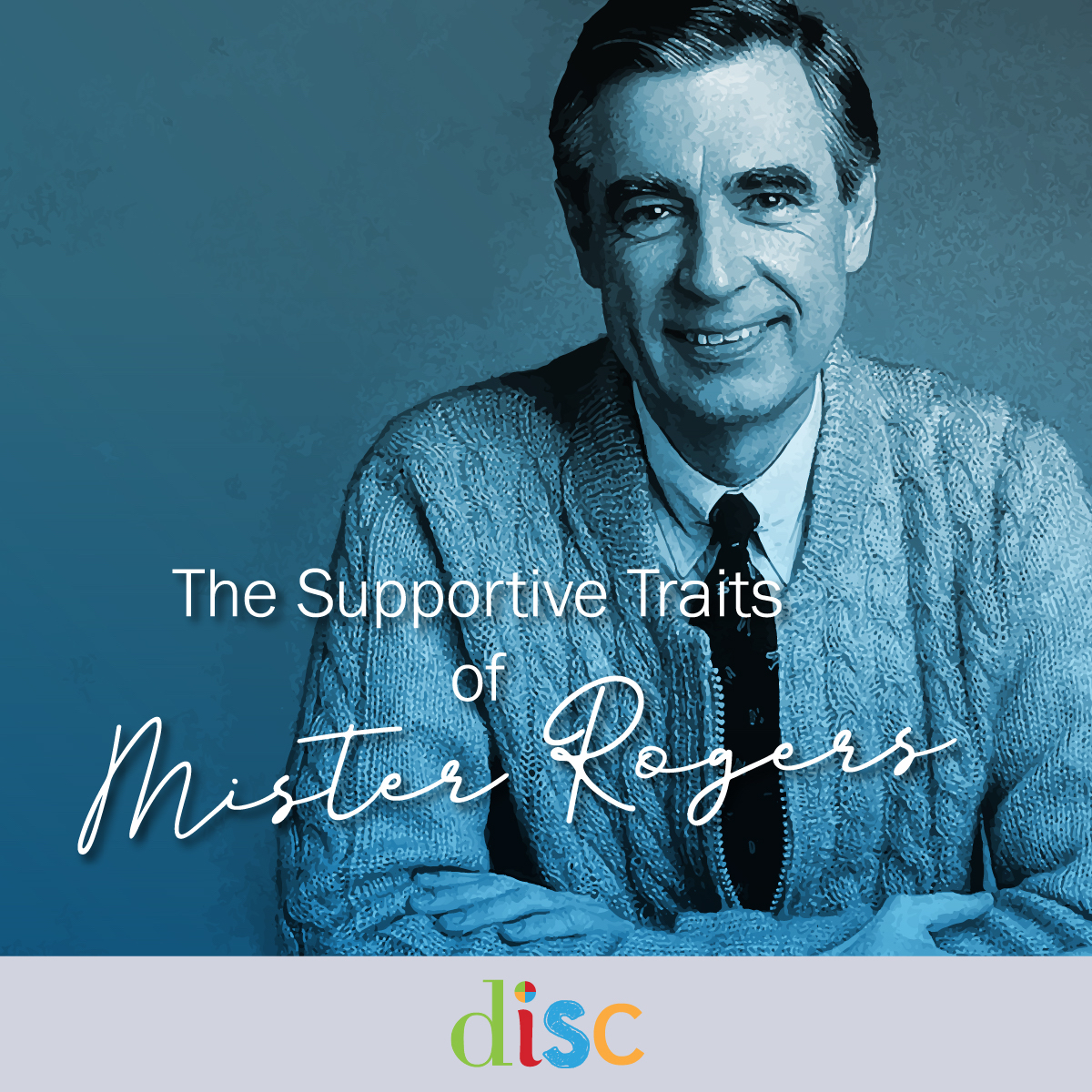 Every day for decades children of all ages turned on their televisions to learn about the world from their favorite neighbor, Mister Rogers.

Unlike many shows on television for kids, he wasn’t bold or flashy, loud or boisterous, violent or rambunctious. He wasn’t there to entertain so much as he was to reach and teach viewers intentional lessons about what was going on around them, and that no matter what, they were accepted and loved exactly the way they were.

There are many examples from Rogers’ life that we could use to show this but we’ll focus on a few things including: His music, his interaction with others, and his dedication to Mister Rogers’ Neighborhood.

Before becoming a television show host and graduating from seminary school, Rogers graduated with a degree in music composition. Which means that he wrote the music and lyrics for his television show largely himself.

He used this music to relate to things that kids could be going through or feelings that they may have been having trouble putting words to. Songs like “Sometimes I Wonder If I’m a Mistake”  attempted to connect to the viewers on a personal and emotional level with lyrics like, “Sometimes I wonder if I’m a mistake/I’m not like anyone else I know.” And within the same song he’s also sharing messages that spoke directly to them on an individual level such as, “I think you’re just fine as you are” and “You’re not a fake/You’re no mistake/You are my friend.”

And while Mister Rogers may not have been in the room singing to them directly, he looked at the camera lens as if he were looking into the eyes of the viewer.

On screen or off screen, Rogers used eye contact to connect with anyone he came in contact with. There was never any question of where his attention was focused.

Yo-Yo Ma even said that in an interview with Rogers, he looked in his eyes and said, “It’s so nice to see you, and to be with you.” In the moment, it “scared the living daylights out of [him]” but Ma knew that Rogers meant every word.

Despite being someone who was known very well in a crowd, he would focus on the smaller groups or the individual person, which is pretty common for someone with Supportive traits to do. Like Rogers, they’re more comfortable in smaller groups or one-on-one because they truly want to hear and connect with that person.

Rogers never planned on going into television until after watching what was considered children’s television in 1951. He actually told an interviewer, “I got into television because I hated it so. And I thought … there’s some way of using this fabulous instrument to be of nurture to those who would watch and listen.” And use it he did.

He felt like he had a responsibility to the viewers of his program to show them that they are seen, loved, and worthy of respect. Like many with Supportive traits, Fred Rogers spoke softer and slower throughout his program (and life). The beginning and ending of his program was routine and something that didn’t waver throughout 895 episodes and 31 seasons. He would always begin by singing “Won’t You Be My Neighbor” followed by exchanging his jacket for a sweater and changing his shoes while doing the reverse at the end of the episode. And while some may see predictable as too safe or boring, it worked for Rogers for roughly 30 years.

Mister Rogers is a prime example of how people with Supportive traits can communicate and interact with the world around them. He also shows us that you don’t always have to be fast-paced or bold to get your message across. You can connect with people on an individual and emotional level that helps them feel like you really care about their message.

Each of us has our own unique communication style, our natural preference for how we prefer to communicate. This phenomenon is expressed through the DISC model. We hope that by looking at some illustrations of these traits in a popular culture setting, you will  better understand the DISC model.

Let us know what you think about our analysis here, and  please share and comment on our social media channels with your own interpretations as well as suggestions for other pop culture icons we can look at through the DISC lens. To find out your own DISC style, take this free DISC style test.

If you've taken either registered for an account with our free assessment or took a paid DISC assessment, you'll be able to retrieve your downloadable … END_OF_DOCUMENT_TOKEN_TO_BE_REPLACED

https://youtu.be/0vC_M82o6m8?rel=0&showinfo=0 In this post, we'd like to discuss a question we wish we would get asked more frequently. How … END_OF_DOCUMENT_TOKEN_TO_BE_REPLACED