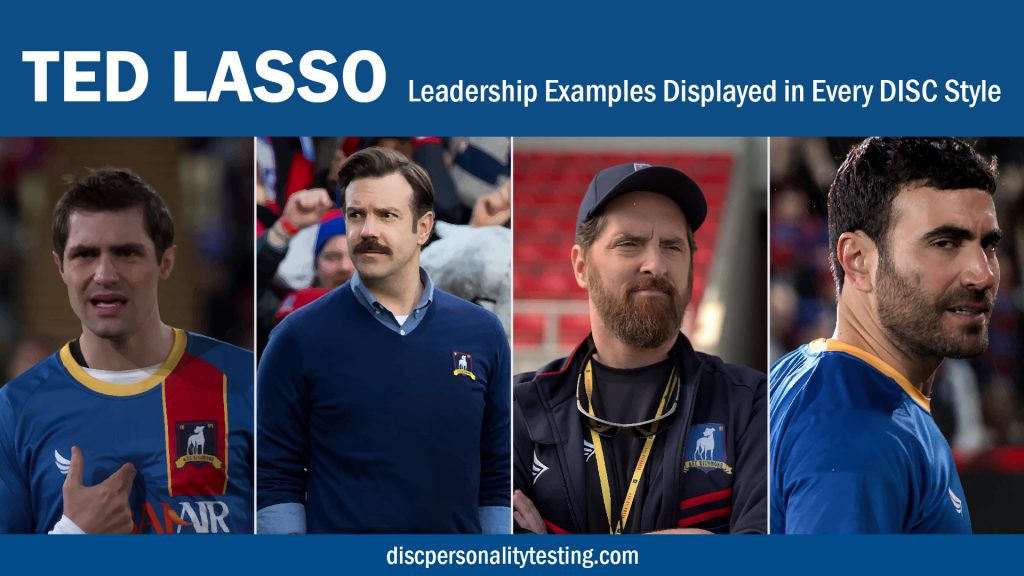 If you have AppleTV you may already be familiar with one of their popular shows Ted Lasso. It’s about an American football coach that has been hired to coach a European football club. You might be like Ted and know little to nothing about European football, but you can still see examples of how leadership can come from every DISC style and still be effective.

AFC Richmond’s football star, Jamie Tartt, is a bit arrogant and self-centered toward the beginning of the show. He loves being front and center and has big goals for how his career is going to go. When he’s benched during the season to calm his ego a bit, he gets really upset about it because he is no longer in the spotlight. It feels like he’s lost something. We also see he can be a bit of a hot head toward other teammates, including Roy Kent.

However, as the season progresses, he learns how he can make the team’s needs his needs and what he needs to do for them to all reach the goal together. He can use his dominant traits to make decisions that lead the entire team to victory.

Ted is our lovable American football coach from Kansas, but his goal with this team isn’t about winning games. It’s about bringing the team together. He knows that by doing that in the big picture, it can lead to winning games and then some. We see in every episode how much positive energy he has and it can be truly infectious to the rest of the cast on the show.

When he first arrives the manager of the football club, Rebecca, doesn’t seem to like him at all. But that doesn’t prevent Ted from bringing her a box of biscuits every morning and trying to get to know her as more than just his boss. He feels that if he is well-liked, it will help him lead better and succeed more.

With his team we see how much he tells stories to his players when they come to him with a problem or when Ted tries to help a player with something specific. One of the coaching lines he gives to a player is “Be a goldfish.”Essentially that means to forget bad stuff and put it out of your mind so you can continue moving forward. While some of his stories and examples may seem a little out of the ordinary, they work to help the team trust him as their coach.

As Ted Lasso’s right-hand man, we see that for much of the show Coach Beard does whatever he can to support Ted in his goal of uniting the team and hopefully winning games. We also see how much he truly cares about the other coaches, Ted and Nathan. No matter what’s going on in their lives, he knows when they need to talk and drops what he’s doing to help them.

He’s not afraid of sharing his feelings or helping his fellow “Diamond Dogs” share theirs and encourages conversations about family, relationships, and the team itself in almost every episode. He wants his fellow coaches and the team how much he wants all of them to succeed together.

Roy is AFC Richmond’s team captain and has been playing football for quite a while. To say that he doesn’t like change or for rules to be challenged would be a bit of an understatement. That, and many other things, are why he butts heads with Jamie Tartt so often.

He’s a team player but he does it in a methodical and logical way. He focuses on the details, the plays, and what exactly needs to happen in order to reach their goal of winning a game. By doing this, he also helps his fellow teammates figure out the small things that they can do and leads them in this way. He doesn’t enjoy having his authority challenged, but we see that much of that is due to him being afraid of not being able to play the sport he loves so much.

One of my favorite Roy Kent scenes in the show involves him and Jamie at the fundraiser dinner. He talks out what he’s thinking and feeling with Tartt and both of them tell each other what they need from the other. While a bit of a strange way of showing it, it was a great example of how you don’t have to like someone in order to work with them effectively. You just need to communicate what you need from them, find out what they need from you and follow through.

Leadership comes in many different styles and from people with any blend of DISC traits. No matter what your DISC Style is, you can lead. Like the characters in Ted Lasso, you may lead differently than someone else, and that doesn’t mean it can’t be any less effective.

If you've taken either registered for an account with our free assessment or took a paid DISC assessment, you'll be able to retrieve your downloadable … END_OF_DOCUMENT_TOKEN_TO_BE_REPLACED

https://youtu.be/0vC_M82o6m8?rel=0&showinfo=0 In this post, we'd like to discuss a question we wish we would get asked more frequently. How … END_OF_DOCUMENT_TOKEN_TO_BE_REPLACED