You are here: Home / DISC Examples / The DISC Styles of Breaking Bad 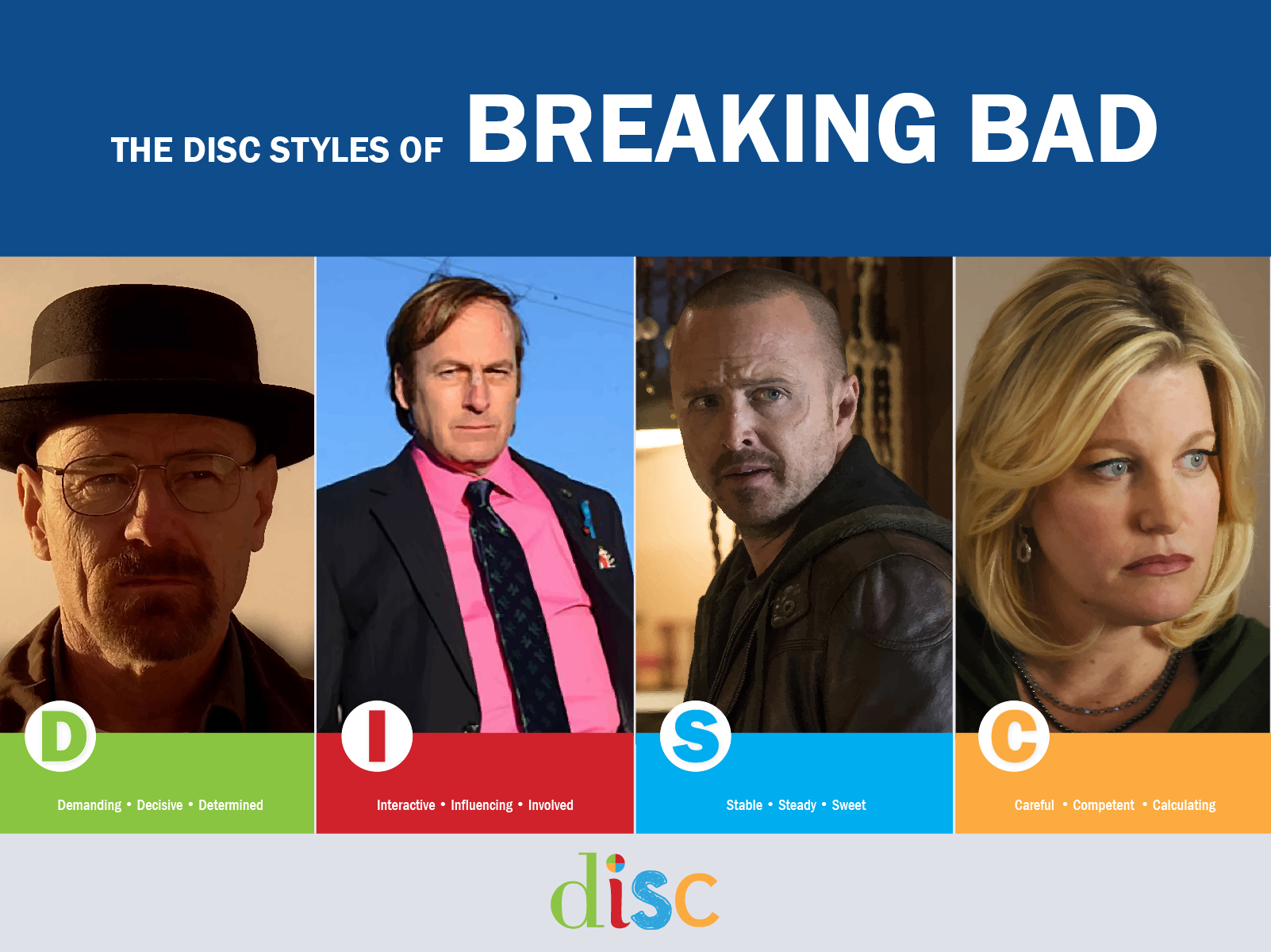 For many, including me, the pandemic has offered an opportunity to read books we’ve always wanted to read or watch TV shows and movies that maybe we missed the first time around. Without sports, restaurants and other “normal” entertainment, I took the chance to watch Breaking Bad for the first time.

I had heard the rave reviews, and it did not disappoint. It was also clear to me about halfway through season one that this show begs to be analyzed through the DISC lens. Vince Gilligan’s characters typify not only the four main DISC styles, but also show how we use adaptive styles in different situations and even grow and change through experiences and circumstances.

The entire arc of the show is centered around the three-way chess match between these men and their dominant styles. Hank and Gus offer us polar examples of good and evil coming from this controlling style. This is a great way of illustrating that no DISC style is either “good” or “bad” (or productive/unproductive in a business environment) by itself. The motivations and intentions of the individual and the culture determine that, and that’s an analysis on another level for another time.

I struggled putting Walter here. I think he definitely has “I” and “C” qualities as well. In fact, had he remained Walter White, high school Chemistry teacher, husband and father, those traits may have become more dominant in him. But as we see Walter slowly transform into “Heisenberg,” methamphetamine kingpin, we see the “D” trait almost consume him.

In the final season, Walter tells his wife, Skyler, “Let me clue you in. I am not in danger, Skyler. I am the danger. A guy opens his door and gets shot, and you think that of me? No! I am the one who knocks!”

That’s when his transformation to “Heisenberg” is complete and the “D” trait takes over. Certainly the others remain part of his adaptive style, though.

Like I said above, a good case could be made for Walter White here. But since we placed Walter elsewhere, I went with everybody’s favorite ambulance chasing attorney, Saul Goodman here. Saul is more than just a legal advocate for his clients. Throughout the show, he’s also continually trying to influence their behavior and choices. Saul’s compass doesn’t necessarily point toward a moral or legal “true north,” but his advice to Walter and Jesse generally would make them less likely to die or end up in prison.

Jesse is not only the business partner and lab assistant Walter White needs, he’s also the perfect contrast for the changes Walter undergoes throughout the series. Jesse is nothing if not steady and loyal. He’s loyal to Mike, to Jane and Andrea, and even to Walter, despite Walter’s ever-increasing manipulation and emotional abuse. In the end, Jesse is finally able to stand up to Walter, telling Walter to “do it himself” when he asks Jesse to kill him and put him out of his misery.

Though Walter’s “C” traits come out when he’s in the lab, in life it’s a different story. If not for those traits in Skyler, the jig would have been up for Walt about midway through season three. It’s ultimately her attention to detail that enables Walter to take his enterprise to “empire” status. And had Walter actually listened to Skyler’s caution, perhaps his life and so many others might have turned out differently.

I had to include Mike in here because he is probably my favorite character from the show. I initially thought of Mike as an “S” as he was a dutiful bag man for Gus, but Mike was never just there for support. Mike was for Gus as Skyler was for Walt…only Gus had enough sense to listen to Mike. Not surprisingly, it’s when Mike is laid up in Mexico recovering from being shot that Gus becomes vulnerable to Walter.

Many “C” characters in TV, movies and fiction come off as unlikeable. Indeed, Skyler isn’t a very sympathetic character for much of this show. Mike is not just painstakingly careful and attentive to every detail, he’s also wise. Mike not only gives good advice, but he’s extremely honest to himself and aware of the people he’s dealing with, something he tries to convey to Jesse.

Breaking Bad certainly ranks among the best ever produced on television. What do you think of our analysis? What changes would you make? What about other characters, like Walter Jr. or Marie? Let us know your thoughts in the comments and on social media.

If you've taken either registered for an account with our free assessment or took a paid DISC assessment, you'll be able to retrieve your downloadable … END_OF_DOCUMENT_TOKEN_TO_BE_REPLACED

https://youtu.be/0vC_M82o6m8?rel=0&showinfo=0 In this post, we'd like to discuss a question we wish we would get asked more frequently. How … END_OF_DOCUMENT_TOKEN_TO_BE_REPLACED