You are here: Home / DISC Examples / The Handmaid’s Tale: DISC Styles in Crisis 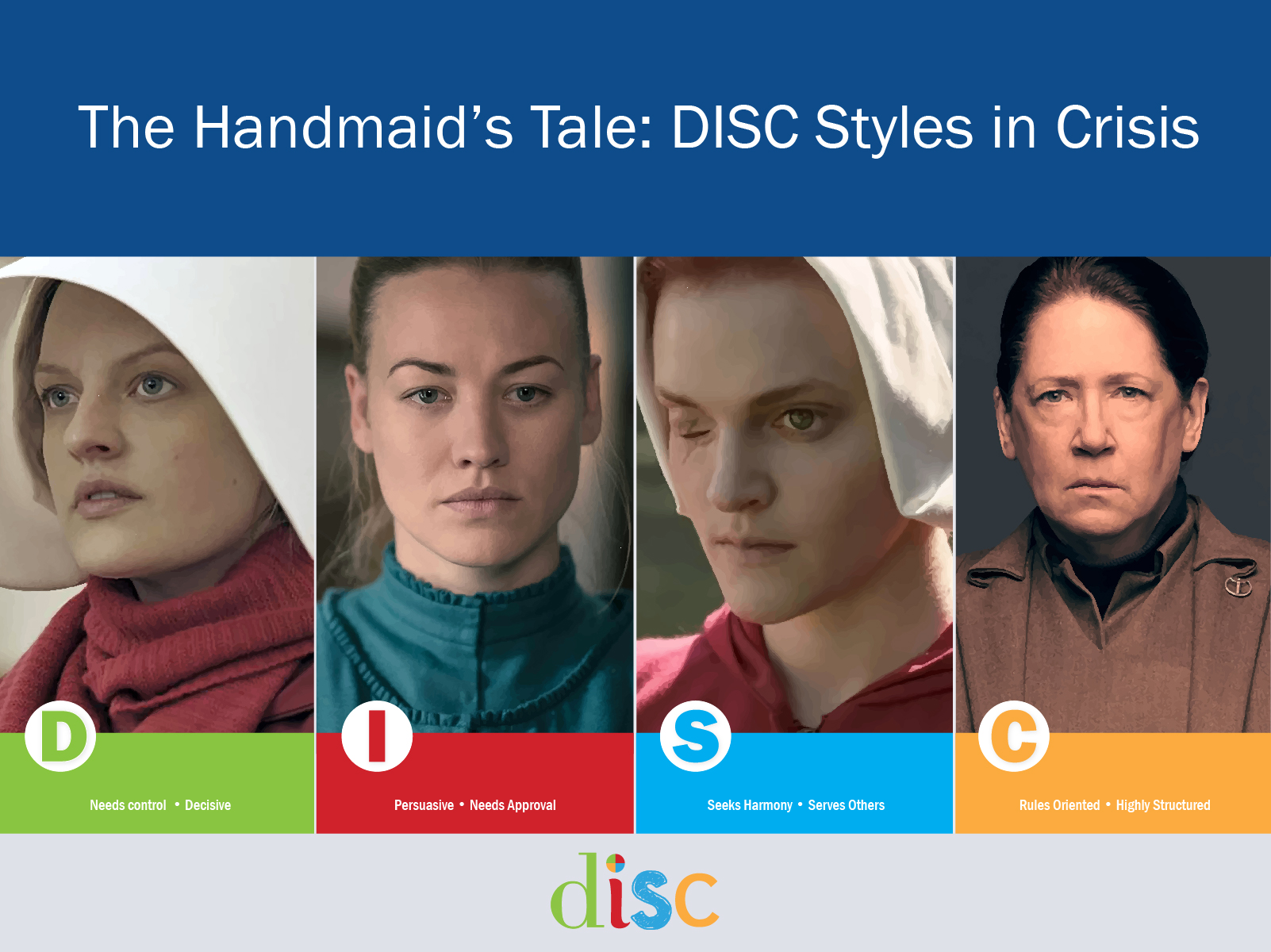 The Handmaid’s Tale is originally a book written by Margaret Atwood, but thanks to Hulu, it has also become a wildly successful television series. If you know anything about this show (or book) you’ll also know that the situations and events that occur in fictional Gilead are not anything close to normal. That being said, what follows is a great example of how our DISC styles can adapt and change somewhat when we’re in highly stressful situations. Because these four women aren’t in their normal environment, their primary drivers might be a little different than they would be outside of Gilead.

As the heroine of our show, June’s Dominant traits shine in so many ways. June is someone who sticks to her plan with little to no hesitation once she’s made up her mind. As we see in the show, sometimes pieces of smaller plans change in the moment, but every time she has decided on a goal, she is determined to make it happen. We also know that her ultimate goal of getting Hannah out of Gilead never wavers, even if the plan to achieve that goal sometimes does in a snap decision.

To June, staying in Gilead and doing nothing to change her situation would absolutely wreck her. Not only does she hate not being in control of her own body, but she isn’t even in control of her own life. Some of her fellow handmaidens have accepted their position within Gilead. June uses hers to problem-solve her way out. And while she has her moments where she lets herself break down a little bit, she is someone who doesn’t back down from a challenge, no matter what she’s facing.

It’s easy to think of Serena as someone with high supportive or cautious traits if you only consider the cold and submissive wife that we normally see in Gilead; but that’s only a small part of her. If you look at how Gilead started, you’ll notice that she had a huge hand in bringing it about which requires big-picture thinking. She also shows a lot of persuasiveness not only to the crowds that she’s speaking with about her book, but even as she addresses the commanders to ask them about the right for the Wives to read the Bible (someone they were banned from doing).

Serena may also show a lot of confidence when she’s in front of June, but we do see how much she seeks the approval of her peers and husband as well. We also see how much she even seeks the approval of Nicole (Holly) because she wants to be thought of as a mother to her despite not being her birth mother. And while Inspiring may be her primary trait, we do see mixes of Cautious traits as well. What is harder to see is whether that’s her way of coping with Gilead and her infertility or a true style blend for her.

While she was rebellious at first and does have some outbursts, her adapted style shows that she has a lot more supportive style traits. She constantly thinks of the best possible scenario whether that’s reuniting with her son, running away with her commander because they’re in love, or even hoping that she can keep baby Angela. She’s constantly looking for this sort of harmony when everything will be happy again or finding small bits of harmony among the chaos.

Even when Janine is in the colonies, she finds a way to keep smiling as well as improve the lives of others around her. She cares deeply about others and tries her best to make light of any situation, which says quite a bit considering all that she’s been through. Whether she’s making sure someone gets a proper burial, organizing a wedding in the colonies, or tending to her daughter she shows that she has a heart for others.

Aunt Lydia is all about the rules when it comes to the handmaids. Not only does she know the rules, but she enforces them. When asked questions about why certain things are done in Gilead, she usually looks back to the structure and order that has been established as a guideline. That structure is not only something that she enjoys but it consumes her entire identity. Throughout the series and the books, we see Lydia as the embodiment of those rules among the handmaids.

She focuses on the facts of most situations and rarely lets her emotions play a role in any decisions. She does have a few moments where you can tell that she cares for the handmaids that she works with; but ultimately the rules of Gilead are what drives her. She believes that if she can’t enforce the rules and keep the structure together, that everything will be utter chaos.

Crisis and high-stress situations definitely affect the way we communicate in the real world, too. Each of us has our own unique communication style, our natural preference for how we prefer to communicate. This phenomenon is expressed through the DISC model. We hope that by looking at some illustrations of these traits in a popular culture setting, you will better understand the DISC model.

Let us know what you think about our analysis here, and  please share and comment on our social media channels with your own interpretations as well as suggestions for other pop culture icons we can look at through the DISC lens. To find out your own DISC style, take this free DISC style test.

If you've taken either registered for an account with our free assessment or took a paid DISC assessment, you'll be able to retrieve your downloadable … END_OF_DOCUMENT_TOKEN_TO_BE_REPLACED

https://youtu.be/0vC_M82o6m8?rel=0&showinfo=0 In this post, we'd like to discuss a question we wish we would get asked more frequently. How … END_OF_DOCUMENT_TOKEN_TO_BE_REPLACED