You are here: Home / DISC Examples / Which Peanuts Character Are You? 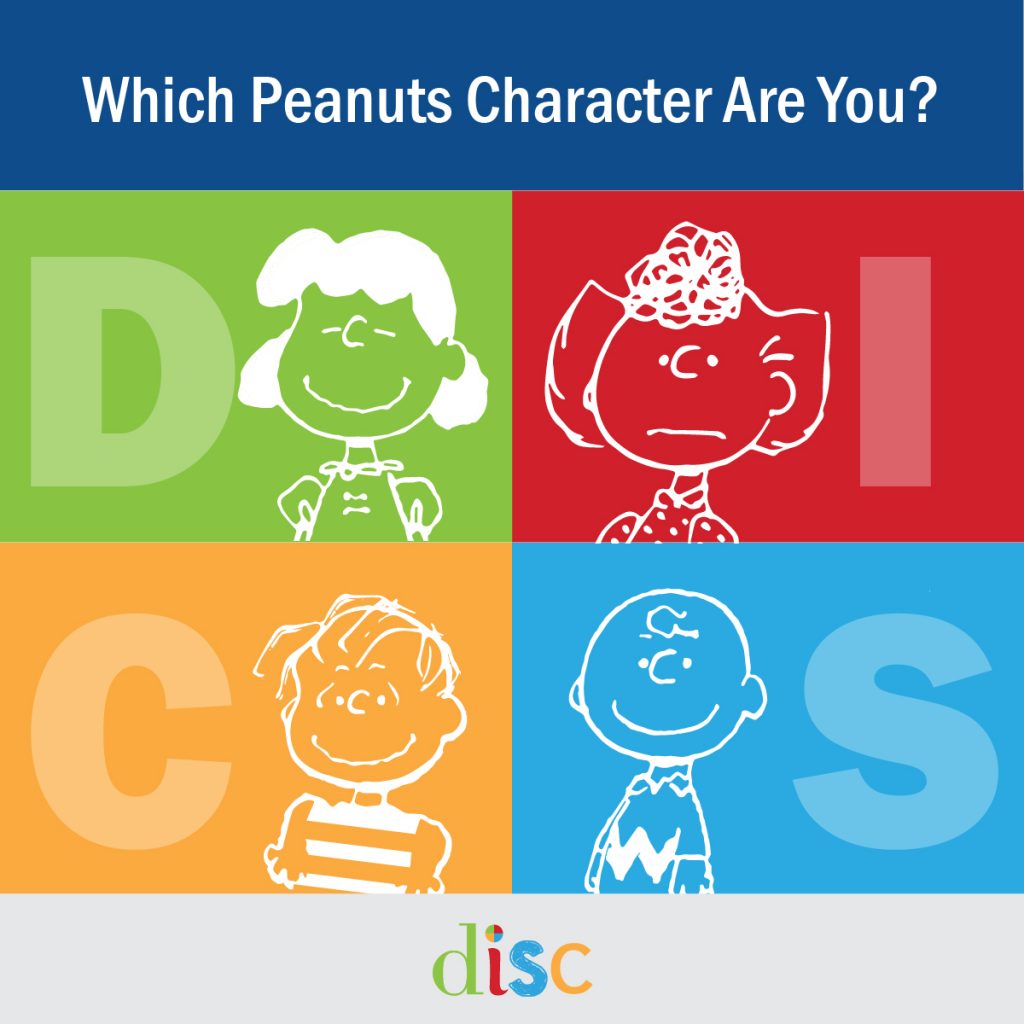 Some of the most iconic characters known to American culture are the lovable creations of the late cartoonist, Charles Shulz. His Peanuts characters have delighted multiple generations now for a very simple reason: we connect with them. Whether we’re Charlie Brown forever trying to kick the football (or Lucy forever pulling it away) we identify with the experiences and emotions of these fictional children.

Let’s take a look at the DISC profiles of a few of the Peanuts gang:

As you might have guessed, Lucy likes control. She especially radiates her control over brother, Linus, and friend, Charlie. She displays her assertive nature and problem-solving prowess through her Psychiatric Help Booth. She is determined and is usually leading – remember the group going Trick-or-Treating, who is in the front, leading the way? And of course, in the ongoing football game with she and Charlie Brown, she’s always the one holding the ball.

Sally, Charlie Brown’s sister, is fun-loving and high energy. Who doesn’t love Sally? She tells a lot of stories, always with a high amount of expression and emotion. She is lighthearted and free-spirited and, because she wants to be liked (by Linus) will forfeit her Halloween Haul for a fruitless night in the pumpkin patch waiting for the Great Pumpkin with Linus.

As baseball manager and pitcher, Charlie Brown is always about TEAM. He’s the glue that holds the Peanuts gang together. Every season, every game, he shows up.  He is patient and non-confrontational – especially with Lucy’s antics and Linus’ blanket. Charlie Brown is sensitive to others feelings and always hopes that everyone can just get along. It’s Charlie Brown’s Christmas tree that ultimately brings the quarreling group of children together in unity. He doesn’t make waves, and he likes routine (as evidenced by his good care of Snoopy.)

Linus is exceptionally logical and acts as the philosopher and theologian among his group of friends. He is very unemotional (except for his devotion to The Great Pumpkin). But even then, his relating of the story is very matter-of-fact, filled with rules and order, focused on facts and details For Linus, sitting alone in a pumpkin patch on Halloween makes perfect sense and he can’t understand why others won’t join him.

Which of the four Peanuts characters do you best understand and relate to? While it’s not always true, their primary trait is probably your primary trait.

What do you think of this analysis? Are there any that you would change? What about other Peanuts characters (does Snoopy have a DISC style)? Share this post with others and please let us know your thoughts in the comments section or on any of our social media channels.

If you've taken either registered for an account with our free assessment or took a paid DISC assessment, you'll be able to retrieve your downloadable … END_OF_DOCUMENT_TOKEN_TO_BE_REPLACED

https://youtu.be/0vC_M82o6m8?rel=0&showinfo=0 In this post, we'd like to discuss a question we wish we would get asked more frequently. How … END_OF_DOCUMENT_TOKEN_TO_BE_REPLACED