You are here: Home / DISC Examples / Which Silicon Valley Character Are You? 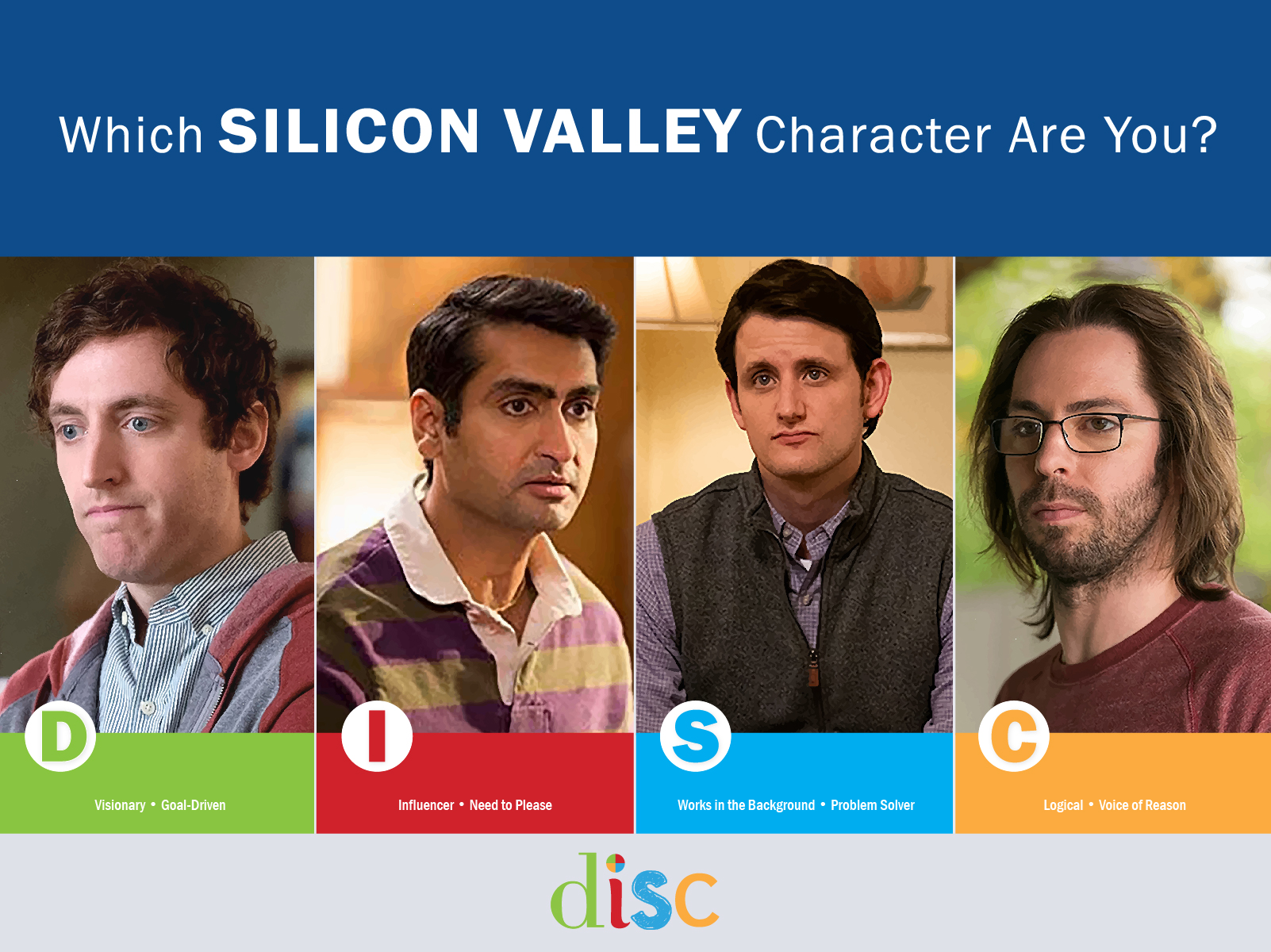 The HBO comedy series Silicon Valley centers around a startup company called Pied Piper. While the goals of the company change throughout the show, it’s been seen as a great example of not only a pivoting business but also some of the culture around startups and technology in the Valley. The show may have ended, but it shows us how different DISC styles coming together can strengthen a team. (It also shows us how people in the same industry can have different styles and still succeed.)

Richard Hendricks may start off the show seeming like a stereotypical software designer with severe social anxiety, but his big-picture thinking for a new compression application (and later, new Internet) is what drives the show and his fellow characters. Throughout the show we watch him making lists, questioning the status quo, and pull a lot of all-nighters trying to work out a coding bug or algorithm change. He will seemingly stop at nothing to reach his goal. Richard is driven by results and goals that he sets himself, but he is able to use his vision and drive to inspire his company to the same level of achievement as well.

Dinesh is definitely someone that you would call a people-pleaser. He’s constantly doing something to influence how someone else sees him whether that’s bragging to his cousin about the app he’s working on or even buying a Tesla to seem cooler around the office. In fact, Dinesh seems to be driven to do something more than the task itself because of the people involved in the situation. We see this a lot in the show with his interactions with Gilfoyle (Dinesh’s style opposite). He doesn’t always focus on completing a task just to complete the task but he wants to either seem better than Gilfoyle or to be noticed by Gilfoyle. He’s also one of the most expressive and animated characters on the show. That being said, he’s also sometimes the one to tell Richard to do something a little bigger, bolder, and to take more risk, which helps Richard come out of his comfort zone and achieve something bigger than he could’ve imagined.

When we first meet Jared, he’s the right-hand executive for the head of a large tech company, Hooli. But after learning about Richard’s vision for Pied Piper, he quits his job to work for him. Everything that Jared does is to help Richard achieve his vision. He essentially focuses on helping Richard so Richard can focus on tasks. While Jared does let us into tiny glimpses of his past through some pretty hilarious one-liners, he can be seen as pretty shy and quiet around the office. He’s a bit more soft spoken and is a very caring and sensitive person. And because he wants a harmonious office environment, he’s always working in the background to do whatever he can to solve a problem before it starts or minimize any sort of conflict. That being said, Jared does get loud and assertive when the situation calls for it, but for the most part he keeps to himself.

Known as just Gilfoyle on the show, he is the polar opposite of Dinesh (who is seen as his counter-part). As a senior security architect for Pied Piper, a lot of what he says involves trying to figure out a problem, asking a question, or answering something in a highly-logical fashion. For many situations, he is the voice of reason because he has already thought of the implications for a particular outcome. He rarely does anything haphazardly and frequently talks about wanting his code to be efficient and correct. Gilfoyle usually speaks in an even, almost monotone, voice that doesn’t show a lot of expression. He’s also quick to research possible solutions (or remember a small detail that was easily forgotten) when a problem arises among the team.

As you can see, all four of these men are vital to the team because they all work to complement each other’s strengths and weaknesses. Dinesh inspires the group to do something bold. Richard gives them something to strive for and a plan of action for how to achieve it. Gilfoyle focuses on the tiny details and does a lot of problem-solving to make sure that everything works the way it’s intended. And Jared makes sure that the team is happy, supported, and thriving so they can get everything done.

If you've taken either registered for an account with our free assessment or took a paid DISC assessment, you'll be able to retrieve your downloadable … END_OF_DOCUMENT_TOKEN_TO_BE_REPLACED

https://youtu.be/0vC_M82o6m8?rel=0&showinfo=0 In this post, we'd like to discuss a question we wish we would get asked more frequently. How … END_OF_DOCUMENT_TOKEN_TO_BE_REPLACED