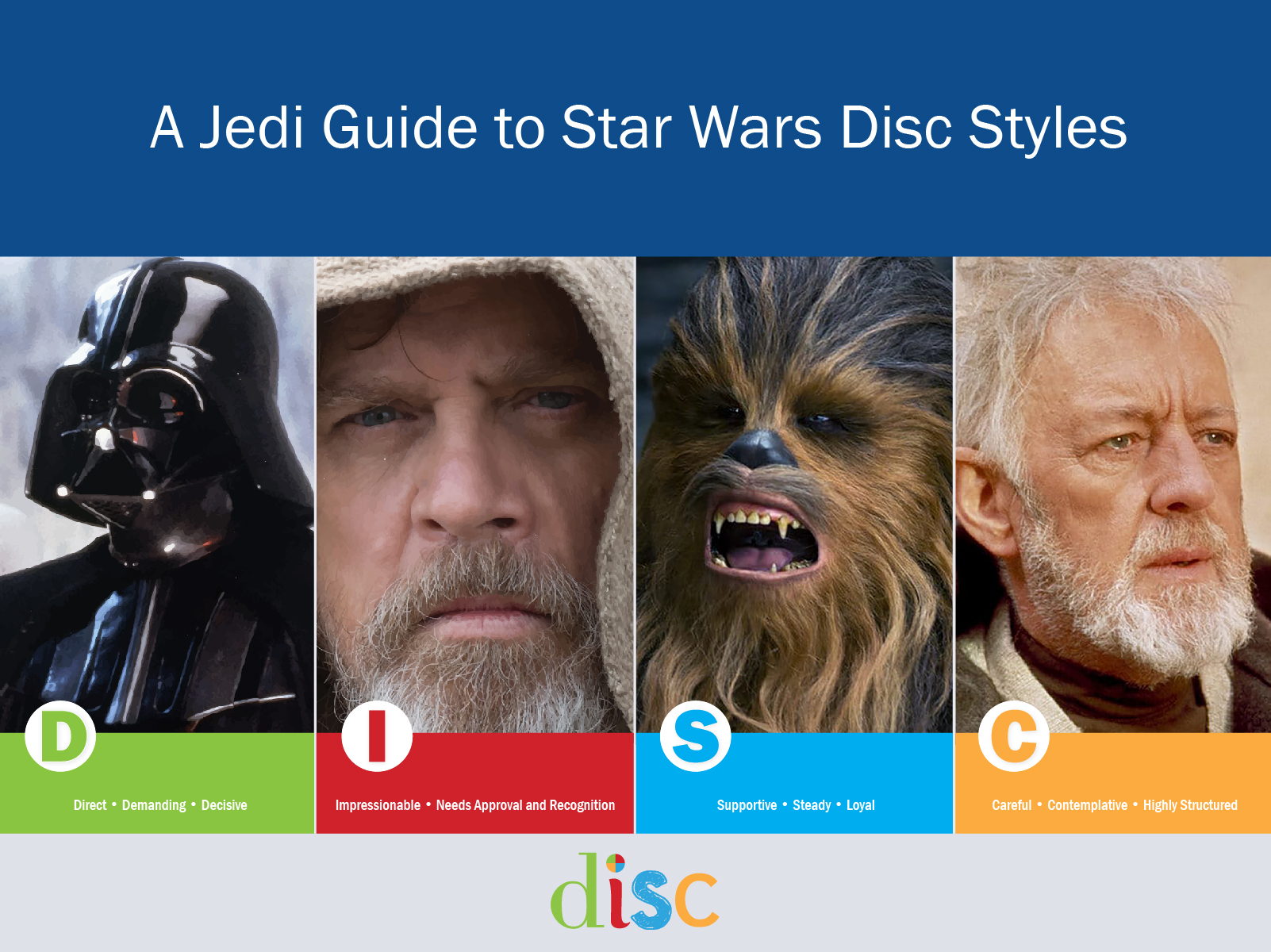 Piggy-backing off of our analysis of The Godfather, let’s look at another group of iconic American film characters. This time we’ll look at the DISC communication styles present in George Lucas’s Star Wars series.

While we could certainly look at some of the characters of the more recent movies in the series, the main characters Lucas introduced to us over 40 years ago (and who mostly still inhabit both the prequels and the final trilogy) remain the archetypes of the Star Wars saga.

There’s a lot of “D’s” there and every one of them fit the Empire’s dark lord. Vader doesn’t suffer fools or failure very well. When his orders aren’t carried out, he tends to experience a significant disturbance in his personal “force.” One of the most interesting aspects of the Star Wars series is looking at how different characters with similar DISC styles display those characteristics. For example, we have the “D” style of Vader versus the very similar “D” characteristics of Princess Leia. It’s obvious which of Anakin Skywalker’s children inherited his DISC style.

When we first meet Luke, he’s dreaming of leaving the nondescript life of Tatooine for something more exciting. He’s intrigued by the legendary stories about “old Ben Kenobi,” but little does he know about the real Obi Wan. Before our eyes, with the guidance of Obi Wan and Yoda, Luke turns from the immature and impressionable student of the force into a Jedi master of his own right, inspiring the rebellion.

Is there a more loyal character in the series than Han Solo’s furry friend, Chewbacca? Though he never utters a word (at least that we can understand), he displays a strength and dependability throughout the entire film series. With Chewy and Han (as well as with R2D2 and Luke) we see the value of partnerships between people with different DISC styles. Vader (and later Kylo Ren) are the epitome of dominance, but neither has a counterpart to balance out the darker and more destructive side of their dominance. One could argue that Chewy and R2 are every bit as responsible for the success of the Rebel Alliance as Han or Luke.

I struggled with where to place the Jedi master. Like most leaders we consider “great,” he has aspects of all the styles which he’s able to use when circumstances dictate. I’ll argue that Obi Wan’s main DISC style is Cautious. I say that because he’s very concerned with things being done the “right way.” For Obi Wan, the Force is as much about process (if not more important) than it is about outcomes. I would say Yoda probably belongs in this group as well.

That’s just a few of the rich universe of characters in the Star Wars saga. What about the others? Where would you put them. We’re eager to hear your answers. Leave your comments here or on our social media pages.

If you've taken either registered for an account with our free assessment or took a paid DISC assessment, you'll be able to retrieve your downloadable … END_OF_DOCUMENT_TOKEN_TO_BE_REPLACED

https://youtu.be/0vC_M82o6m8?rel=0&showinfo=0 In this post, we'd like to discuss a question we wish we would get asked more frequently. How … END_OF_DOCUMENT_TOKEN_TO_BE_REPLACED