You are here: Home / DISC Examples / DISC Styles of the Corleone Family 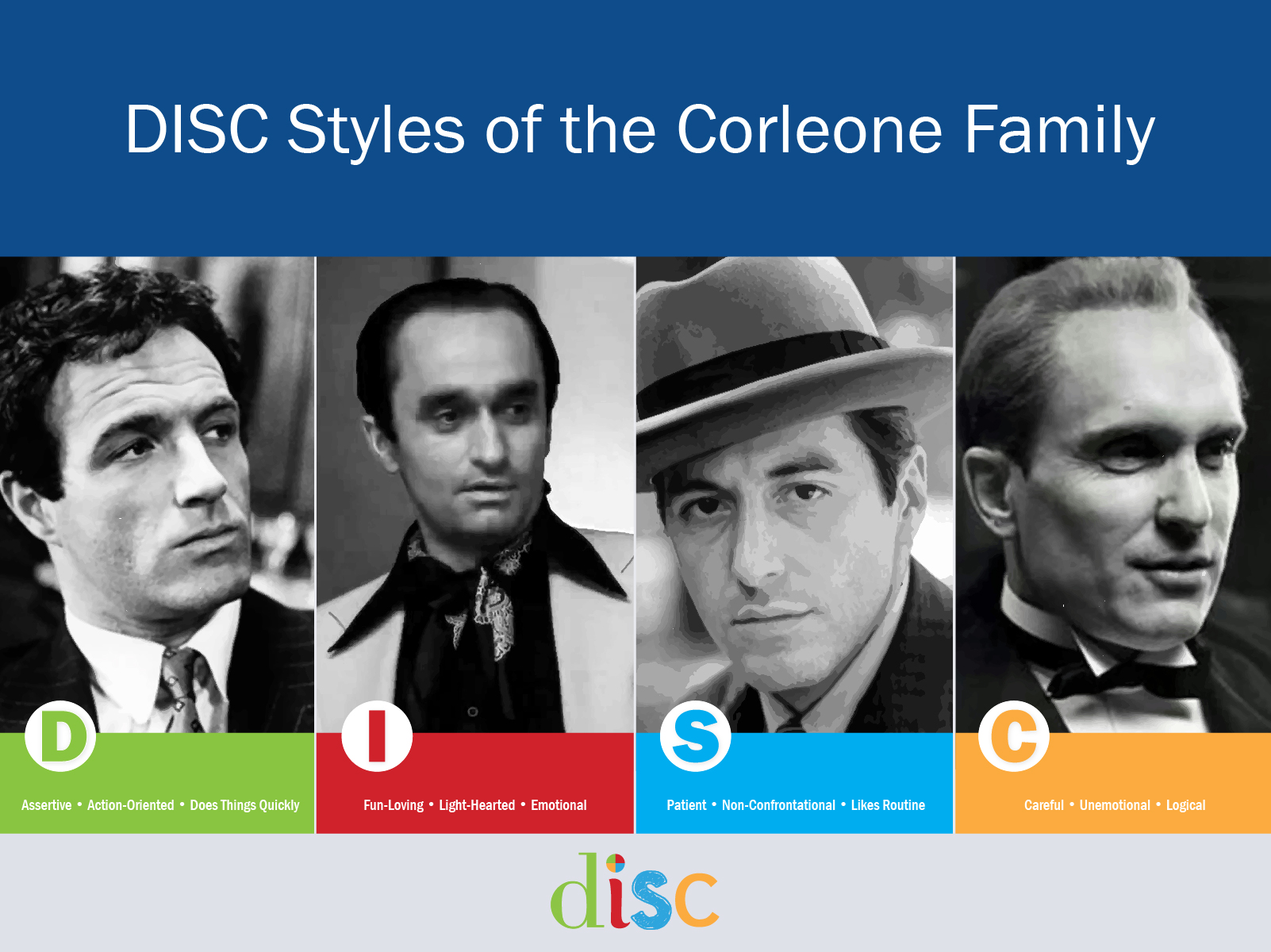 Two of our recent posts profiled a couple of different pop culture businesses with The Office and Silicon Valley. In this post we’re going to take a look at a different kind of business and one of the most iconic series in American film history: The Godfather saga.

They didn’t inhabit a brick and mortar office, nor were they ranked on any Fortune or Forbes listing. Still, they built a global empire from a small olive oil distribution business in New York City. The Corleone “family” included a wide array of characters, but for our purposes we’re going to focus on Don Vito Corleone’s sons, three biological and one adopted, who inherited the family “business” from their father and who make up the core leadership structure.

The oldest of Don Corleone’s children, Sonny is the chosen one to succeed him. Sonny’s decisiveness and drive make him the clear choice as well.  Those qualities in excess, however, eventually lead to Sonny’s downfall as he first goes against his father’s wishes and supports the notion of getting involved in the narcotics trade. That triggers a series of dominoes that lead to an assassination attempt on Vito and eventually Sonny’s own murder at the hands of rival Don Barzini.

In another family, perhaps middle-child Fredo’s emotion and compassion would have found a niche. In the Corleone’s world, it was a weakness. Fredo wanted more than anything to be recognized, to be appreciated. That’s what made it so easy for Hyman Roth and Moe Green to exploit him in Las Vegas and ultimately use him in an attempt to assassinate Michael. In the end, Fredo’s impressionable qualities outweighed his ability to inspire others, leading to his demise.

It’s not until the end of the first film that we see Michael actually ascend into leadership, but that’s not until after his father and Sonny die. It was never Don Vito’s intention to have Michael involved in the “family business.” He thought Michael would make a better congressman, Senator, or even President. Michael becomes head of the family, however, and puts together a patient plan to amass power and exact revenge on those who wronged his family. In the second film, we see Michael’s love of routine displayed when would-be assassins are nearly able to succeed because of Michael’s predictable schedule.

Throughout the saga, it’s clear that Tom Hagen isn’t like his brothers. It’s mostly chalked up to his lack of being a “Sicilian,” but it’s more attributable to his Cautious style. Tom has an ability to carefully and unemotionally represent the family’s interests. This role is needed as neither of the other three Corleone brothers has those Cautious qualities. We see this illustrated best when Tom is negotiating with the studio head on behalf of crooner, Johnny Fontaine. Even as he’s berated and insulted, he never loses his cool. He merely informs Jack Woltz that his employer will be “disappointed” in the bad news and he prefers hearing it right away.

If you've taken either registered for an account with our free assessment or took a paid DISC assessment, you'll be able to retrieve your downloadable … END_OF_DOCUMENT_TOKEN_TO_BE_REPLACED

https://youtu.be/0vC_M82o6m8?rel=0&showinfo=0 In this post, we'd like to discuss a question we wish we would get asked more frequently. How … END_OF_DOCUMENT_TOKEN_TO_BE_REPLACED