You are here: Home / DISC Examples / The Crown: Dealing with Conflicting DISC Styles 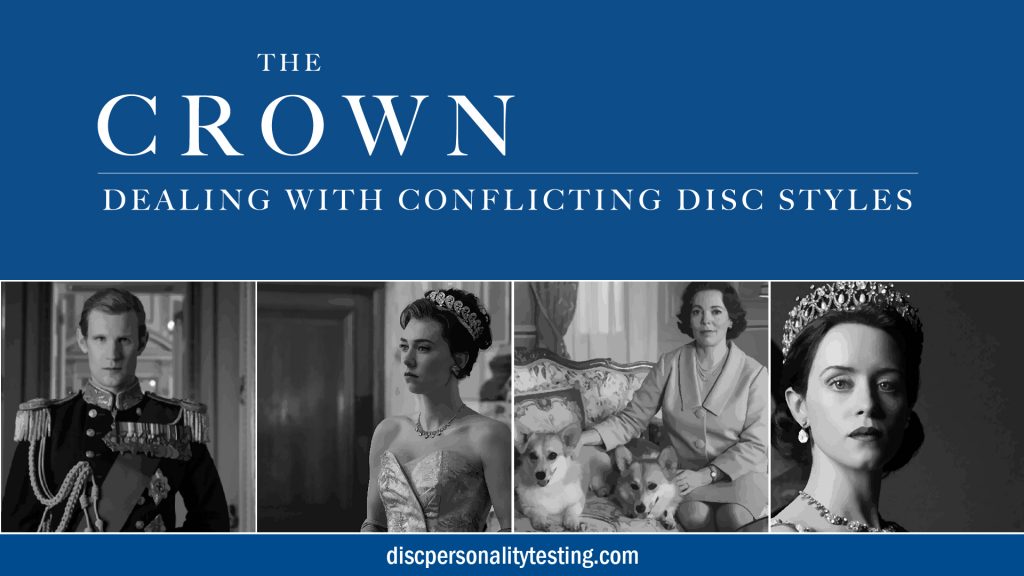 If you’re a fan of shows that feature the British monarchy, then you have likely already seen The Crown on Netflix. While it would be considered historical-fiction, The Crown does a great job dramatizing the life of England’s Queen Elizabeth II from the 1940s, before she is queen, to modern times.

The Royal Family is interesting in that they’re both a family, but also a highly powerful political organization. We see that in order for any organization (or family) to be successful, it requires a great deal of communication and the understanding of one another’s differences. The Crown is a great example of not only how DISC styles can work together, but also how they can cause struggles from time to time with those that are different from us.

With the next installment just having dropped on Netflix, let’s take a look at the DISC profiles of Windsor Castle.

While Prince Philip does display some Inspiring traits given his social calendar, his primary style is Dominant. He knows that his main task and focus is to his wife, Queen Elizabeth II, and it’s that task-oriented mindset that informs everything that he does. We also see that Philip really craves being in control of his life and his family and it can cause a lot of issues when he can’t get that. In the show, he struggles a lot with wanting to be the head of the family and having his children share his name, but realizing that he can’t be because he isn’t the reigning monarch. When he does have the opportunity to be in control of something, Prince Charles’ schooling for example, he is not only decisive in those opportunities, but he’s also determined that no one takes that power away.

If the Queen’s sister, Princess Margaret, is anything she is certainly the life of the party. She loves the attention she gets from the people and enjoys interacting with them at various parties and events. When she has the opportunity to be in the spotlight, she tells stories and lighthearted jokes and overall shows a great deal of energy in front of a crowd. When her sister, or royal protocol, dictates a rule to her, Margaret prefers to bend those rules a little or take her own spin on it. A great example of this in the show is when she hosts a state dinner with a speech that was pre-written for her. Margaret uses the opportunity to “make it a little more fun” even when she is advised not to. This causes a great deal of dissension between Princess Margaret and her sister, Queen Elizabeth II, who prefers to stick to the rules. As complete opposites on the DISC model, we see how they both struggle to not only communicate with each other but also understand each other at times.

As the wife of a former king, The Queen Mother’s life revolves around her family. In fact, it’s her entire identity. Not only does she support her husband, King George VI, as he reigned but she also put a lot of time into raising her daughters, especially given that one of them would be the next reigning monarch. Throughout the show she tends to be more reserved and prefers more of a quiet life, which we see a lot of when she goes to Scotland. When her husband dies and her daughter becomes Queen, she mentions that her family is at a point where it doesn’t need her anymore. But even as she tries to fade into a quieter lifestyle, she is always there to support her daughters and provide advice when they ask.

We see in the beginning of the show that if she could have anything, Elizabeth would prefer to have a quiet life in which she was just a wife and a mother. Becoming queen is something she had never thought possible before her uncle abdicated, much less assuming such an awesome responsibility in her twenties. Unlike her sister, she doesn’t care for the crowds and the parties so she can at times come across as a little cold in her speeches. For the Queen, everything she says and each move she makes is carefully planned so as not only to move the country forward, but not do anything to cause it to move backward. She also takes great care to increase her knowledge because she believes that knowing facts will help her converse better with members of parliament and other royal leaders.

DISC styles apply to any group dynamic, from board rooms to throne rooms to living rooms. What’s your DISC style? Find out with this free DISC assessment. Share it with your co-workers or your family and encourage them to take one as well. Learn to understand the communications needs you all have and watch your peace and productivity increase.

If you've taken either registered for an account with our free assessment or took a paid DISC assessment, you'll be able to retrieve your downloadable … END_OF_DOCUMENT_TOKEN_TO_BE_REPLACED

https://youtu.be/0vC_M82o6m8?rel=0&showinfo=0 In this post, we'd like to discuss a question we wish we would get asked more frequently. How … END_OF_DOCUMENT_TOKEN_TO_BE_REPLACED