You are here: Home / DISC Examples / The DISC Styles of Hamilton 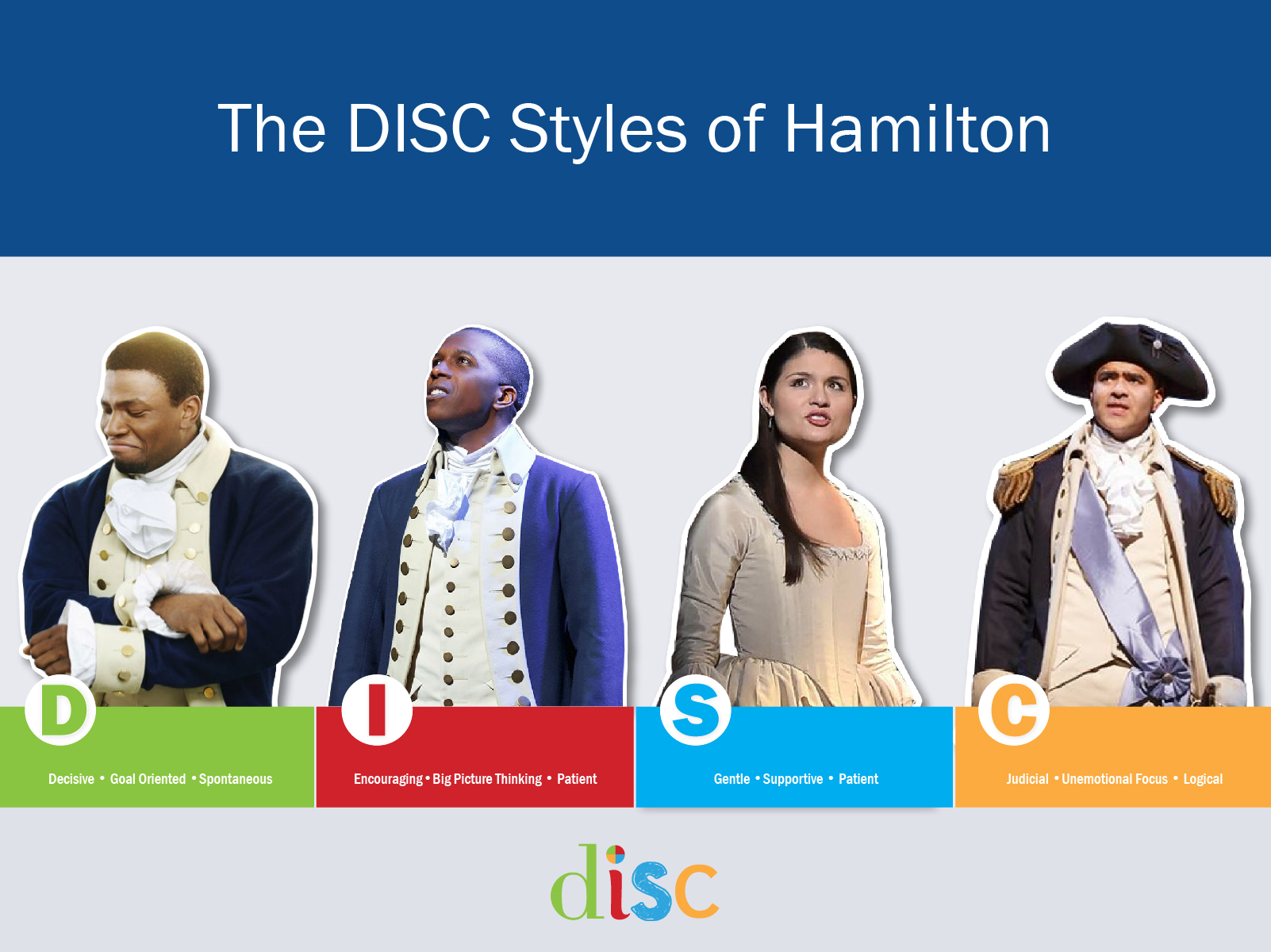 Hamilton has finally arrived! It seems appropriate that we take a deeper look at the motivations of some of our favorite characters.  It’s interesting to examine a few of the players and understand ways in which we are alike – and different – even 250 years later!

This post is based on characters in Lin-Manuel Miranda’s Broadway musical who are based on historical figures. Coupled with the fact that at discpersonalitytesting.com we don’t really advocate putting people in “buckets” – keep in mind that for the purpose of this post, we are demonstrating the strong traits of characters in each of these areas – allowing for style blends.  Most of us have DISC blends and aren’t purely one style.

Hercules Mulligan: Who is the guy who gets it done and doesn’t accept excuses? Mulligan relishes being in control.  He is aware of his surroundings and is spontaneous and decisive when making pronouncements.  He absolutely enjoys being the center of attention and has a healthy self-image, which fuels his goal-oriented behavior.

Dominant D with some C

Angelica Schuyler: She wants a revelation! Her extroverted qualities make her stand out on the stage and unforgettable as a character.  She is a debater. She is a leader. She is a visionary (you can see it, right?). Her logical motivations lend themselves to her C (cautious) traits.  She possesses caution and foresight that allow her to instantly read a situation and come up with a game-plan – and sets her emotions aside to achieve the goal.

The Influencers and Inspirers

Alexander Hamilton and Aaron Burr are BOTH I personalities? Ironic? Or is it?
Alexander Hamilton is very complex – It’s worth mentioning that he possesses many C and D traits as well.  Alex is mega high-energy, a big picture thinker, and super persuasive (Cabinet Battle, anyone?). And despite Burr’s suggestion for him to “smile more,” Hamilton likes to talk and be seen as the smartest one in the room – (not to mention his skill with a quill and all…). He shares all his hopes and fears. As fast as he can think of them, they fall out of his mouth in My Shot. He shows a little D because he fixates on what he wants – and is relentless until he achieves it.

Aaron Burr definitely has a powerful “I” motivation, but whereas Hamilton is enthusiastic in his Inspirational qualities, Burr relies on his cool head and big-picture thinking (remember his idea-sharing conversation with Washington?). Burr isn’t quick to jump – his encouragement is found in his quiet, slow, and patient rhythm (Talk less. Smile more).  He is opportunistic in how he can inspire, not by standing for something but by knowing what he’s not willing to fall for.

Hamilton’s cast of characters is filled with supporters.  Two of the biggest supporters are on opposite sides of Hamilton’s ascendancy.

Elizabeth Schuyler-Hamilton is always seeking harmony and balance.  How many times does she ask, “That would be enough?” She helps the two most important men in her life bond (by beat-boxing of all things) for Phillip’s 9th birthday.  She is gentle, supportive, and oh so patient with the very busy and distracted love of her life.  Even during her most distraught moments, she is not emotionally reactive. Eliza is calm and non-confrontational.  She burns the letters, not the man.

James Madison is supportive of everything anti-Hamilton – which is why he cohorts with Jefferson and Burr to try to bring down Hamilton. Madison shows his cooperative (as well as C-Cautious) nature while bringing Jefferson and Hamilton together for dinner and quid pro quo in The Room Where It Happened. He is gentle. He is patient. He prefers routine and keeping the status quo.  He’s not fond of change and new ideas; however, he will come to the table to help the cause.  And after careful, thoughtful, CAUTIOUS review, he will move forward with change and new ideas.

Well, many of his actions point to unemotional focus on facts and contemplation that yield his steady, logical choices. Washington’s values are what drive him. His past experiences and vision of the future create a character who enforces rules based on order, structure, and judiciousness.  He obviously possesses D characteristics – he’s a problem solver who is entrenched in outcomes as well as process.

King George may reflect whimsy – but, when you look past his insanity, what is revealed is a very contemplative, unemotional, and orderly ruler.  He has no qualms about his plan to ‘kill your friends and family to remind you of his love” because it maintains order and the structure of the colonies place in the world order.  He focuses on facts of how the colonies are rebelling over tea and is careful to ensure the colonists understand the consequences of their actions.  He stands on the stage alone.  He isolates from other people (just like Washington, much of the time).

So what do you think? Do you agree with this assessment? Where would you change it?

What about you? Which Hamilton character are you most like? Let us know in the comments and on social media.

If you've taken either registered for an account with our free assessment or took a paid DISC assessment, you'll be able to retrieve your downloadable … END_OF_DOCUMENT_TOKEN_TO_BE_REPLACED

https://youtu.be/0vC_M82o6m8?rel=0&showinfo=0 In this post, we'd like to discuss a question we wish we would get asked more frequently. How … END_OF_DOCUMENT_TOKEN_TO_BE_REPLACED