You are here: Home / DISC Examples / Sabrina and the Dark Side of DISC 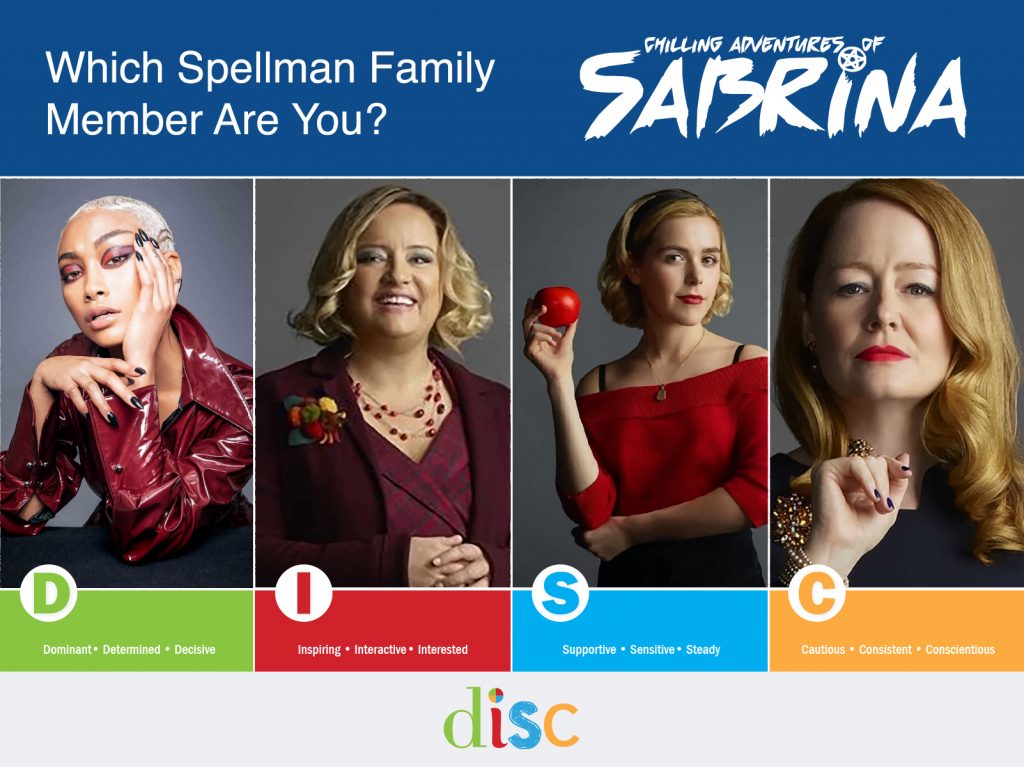 Many of us when we hear “Sabrina Spellman” usually think of either the 1996 television sitcom with Melissa Joan Hart or the beloved character from the Archie Comics from the 1970s. But ever since Netflix came out with The Chilling Adventures of Sabrina (inspired by the 2014 comic of the same name), we have started to see a darker side to our beloved Spellman family.

And truth be told, we may just see a little bit of ourselves in these darker characters and situations. These character illustrate that our DISC styles don’t just describe our positive motives and actions. They can help us understand some of our darker impulses as well. In this post, we’ll be focusing on four of the women from the series, but we’d encourage you to think of the personality styles for others in the series as well.

Prudence is a witch who attends the Academy of Unseen Arts, and while we believe she’s an orphan at the beginning of the series, we learn later that she’s the illegitimate daughter of Father Faustus Blackwood. Since Prudence grew up believing she was an orphan she learned how to be assertive and take charge of her own life. She even is the head witch of The Weird Sisters, a group that contains two other orphans from The Academy.

When Sabrina Spellman first begins to attend The Academy, Prudence begins to find ways to belittle and torture Sabrina because she’s a half-witch/half-mortal and feels that she doesn’t belong with the rest of them. She doesn’t want to lose her place as one of the best witches at the academy, but she also feels like she is solving a problem of keeping the coven strictly to full-blooded witches and wizards.

Throughout the series we see many situations in which she keeps her eyes on exactly what she wants and will do whatever she can to get it…no matter who may get in her way. We also see many times where she is focused on the rules and laws of the coven (seen again in the way she interacts with Sabrina at first) which may also show that she has a blend of Cautious traits as well.

Sabrina’s fun-loving aunt is a delight to watch throughout the series. She truly cares about what is best for Sabrina and her family and finds many ways to show her warm heart to them. We usually see her bustling about the kitchen making potions to cure various ailments, humming little songs to herself while she tends to her plants. She tells Sabrina many stories about not only coven history but her parents as well. She encourages Sabrina to have fun and hang out with her friends and stresses the importance of having those moments while she has the opportunity. She even begins to fall in love with a mortal when she seeks out a job at the local coffee shop in Greendale.

Hilda is a very strong character, but we also see how much she desires her sister Zelda’s approval. Throughout their childhood and into their adulthood she has consistently been bullied and tortured by Zelda, but she remains loyal to her sister when Zelda asks her to be her Maid of Dishonor for her wedding. Whether she’s helping to raise Sabrina; living with her sister; or taking care of her nephew, Ambrose; Hilda’s fierce loyalty to her family also shows that she exhibits some Supportive traits as well.

Sabrina struggles throughout the series between supporting her friends and supporting her family. In the beginning of the show we learn that when Sabrina is baptized into The Church of Night, she will no longer be able to contact her mortal friends again. But to Sabrina, this is unacceptable. She wants to be able to stay with her friends and her boyfriend, but still honor her parents and family by becoming a witch. Sabrina goes throughout the entire series trying to find ways to seek the balance that she believes she can find between them. And sometimes she discovers that it just isn’t possible for every situation.

She’s incredibly supportive of her friends and is with them for some of their darkest and scariest moments. She finds a way to cure Rosalind of her blindness because she knows how much it scares her. She stands by and helps Theo (originally known as Susie) when he tells his friends that he’d like to go by Theo instead of Susie and wants to go out for the basketball team. Sabrina knew how important it was for Theo to make the team, so she even uses her magic to help him do well during try-outs.

Almost everything that she does is to help (or save) someone else whether it’s her family, her friends from Baxter High, or even the friends she makes while at The Academy of Unseen Arts. Her determination and problem-solving skills in quick moments also show that she may have some Dominant traits in her as well.

Zelda Spellman is someone that shows immense devotion and faith to her beliefs and to her coven. She is usually the one reciting the rules for the church to her family, studying up on the sacred book of The Church of Night, and tends to prefer things exactly the way they are. When plans go off course, as they did for Sabrina’s black baptism, it’s hard for Zelda to keep her cool as she starts to think about what the recourse might be. Zelda also shows how much she adores the traditions surrounding her faith. She finds comfort in the order and structure of each and every celebration whether they’re celebrating solstice or The Feast of Feasts.

When asked for advice, Zelda is someone who looks straight at the facts and would never tell you to “search your heart” for an answer. In some ways, you could say that Zelda isn’t very expressive at times as she usually comes off sarcastic and monotone in her responses to her family members. We also see that Zelda also has some Dominant traits as well. Her problem-solving skills are easily shown when she’s hiding a baby from her father because she’s afraid of the child being harmed for not being a male heir. And in dream sequences and in interactions with the head of The Church of Night, we know that, to her, one of the greatest losses would be if she were excommunicated from the Church. Which leads her to do quite a few things even if they may go against doctrine in order to keep herself in good standing.

What do you think of this analysis? Are there any that you would change? What about other “Sabrina” characters? Do you have another show you’d like to see us analyze? Share this post with others and please let us know your thoughts in the comments section or on any of our social media channels.

If you've taken either registered for an account with our free assessment or took a paid DISC assessment, you'll be able to retrieve your downloadable … END_OF_DOCUMENT_TOKEN_TO_BE_REPLACED

https://youtu.be/0vC_M82o6m8?rel=0&showinfo=0 In this post, we'd like to discuss a question we wish we would get asked more frequently. How … END_OF_DOCUMENT_TOKEN_TO_BE_REPLACED