You are here: Home / DISC Examples / Chicago Fire: The Men of House 51 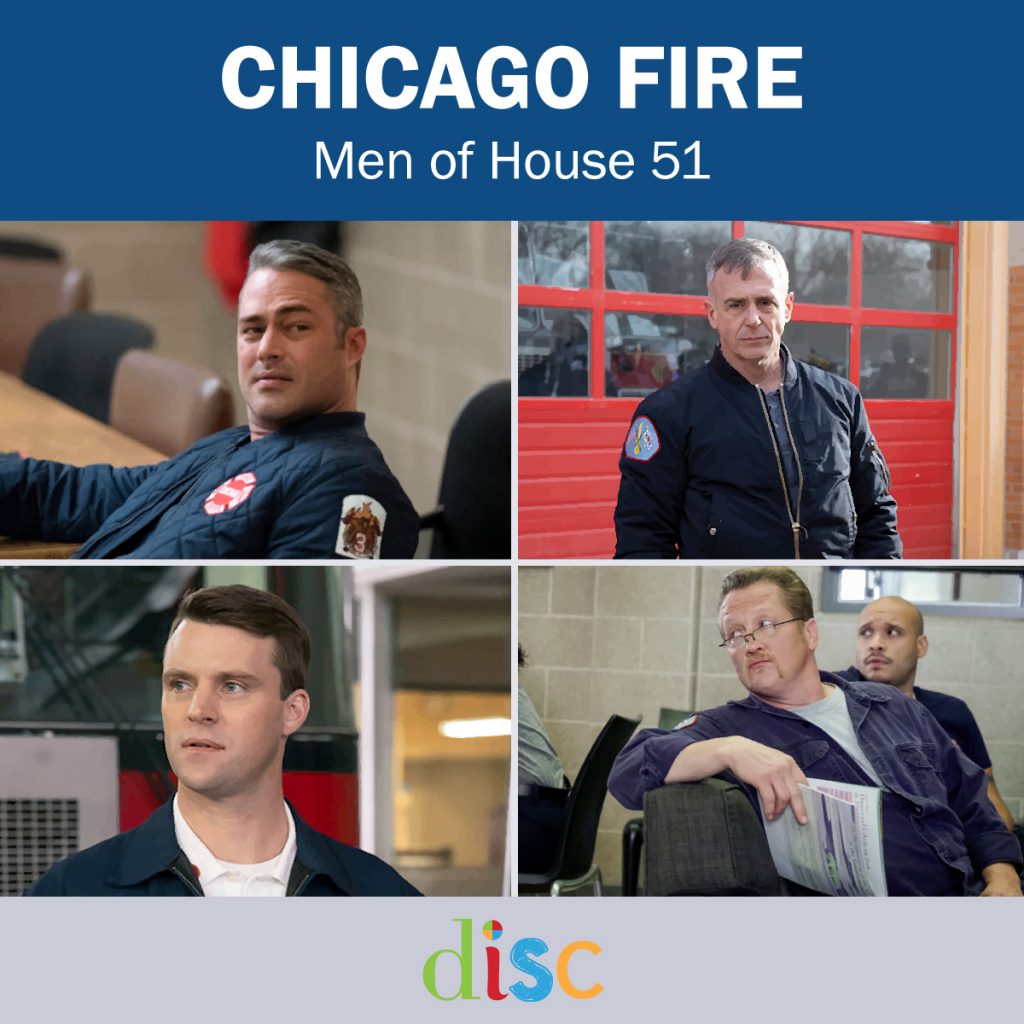 Last week we started a series featuring the characters of NBC’s hit series, Chicago Fire. We took a look at the female characters and how their DISC-diversity works together in the first post. Now we take a look at the men in House 51, an equally diverse bunch who nonetheless comprise a very effective team that excels under stress.

Kelly Severide: As Lieutenant in-charge of Squad 3, a man responsible for the lives of 51 and the welfare of civilians, Kelly Severide exhibits the classic “D” motivators. You will see him arrive on-scene, take in the calamity and give directives to do whatever it takes to get the job done. He isn’t one to stand by and watch the scene around him unfold. He is determined, decisive and likes things done his way (both in the line of duty and in the bedroom.)

Christopher Herrmann: Also a lieutenant, Herrmann doesn’t command his own squad like Severide. But like Kelly, Christopher shares the same quick-witted, high-energy determination to succeed. Unlike Kelly, Herrmann expresses his emotions – sometimes to his detriment (why isn’t he leading his own team yet?).  Christopher is a big-picture thinker (Energy drinks? Mollies?) and tells a lot of stories – what bartender doesn’t, right? One of his motivations is to be liked by his fellow truck members. He believes in people and expresses his emotions to persuade, influence, and to make a difference. He loves people. Anyone with five kids has to be free to share love and to inspire those around him to want to want better for themselves.

Randall McHolland: “Mouch”: Man + Couch = Mouch.  As one of the elder firefighters on Truck 81, Mouch has seen and done pretty much everything. As the resident Union Rep, Mouch is patient, supportive, non-confrontational and seeks harmony at every turn. He wants to fix situations so that there is a balance in all things – he thrives on routine.  Mouch earns his worth each and every shift by being the quintessential team player – caring about others with his gentle and sensitive approach in helping ease the sting out of the drama.

Matthew Casey: Lt. Matthew Casey is the Yin to Severide’s Yang. They are both immediate on the scene and strive to achieve the same goal; however when you see Kelly running into peril, you’ll see Matt contemplating the most logical way to overcome at the scene. He is a rule-follower – and although it will affect his relationships, he will enforce the rules.  “Unemotional” isn’t the most accurate adjective to describe this “C-Motivated” leader – he keeps his emotions in-check and doesn’t allow them to influence his structure, routine, and decisions. Many scenes show Casey in his office, working alone – reading and re-reading paperwork. He is careful – which is a rare trait for a firefighter – but he yields his sensibility with expertise so that his Truck 81 and Cook County’s victims are safe. He thinks and rethinks his actions on the scene so that he and others can learn from past events.

If you've taken either registered for an account with our free assessment or took a paid DISC assessment, you'll be able to retrieve your downloadable … END_OF_DOCUMENT_TOKEN_TO_BE_REPLACED

https://youtu.be/0vC_M82o6m8?rel=0&showinfo=0 In this post, we'd like to discuss a question we wish we would get asked more frequently. How … END_OF_DOCUMENT_TOKEN_TO_BE_REPLACED