You are here: Home / DISC Examples / Chicago Fire: The Women of House 51 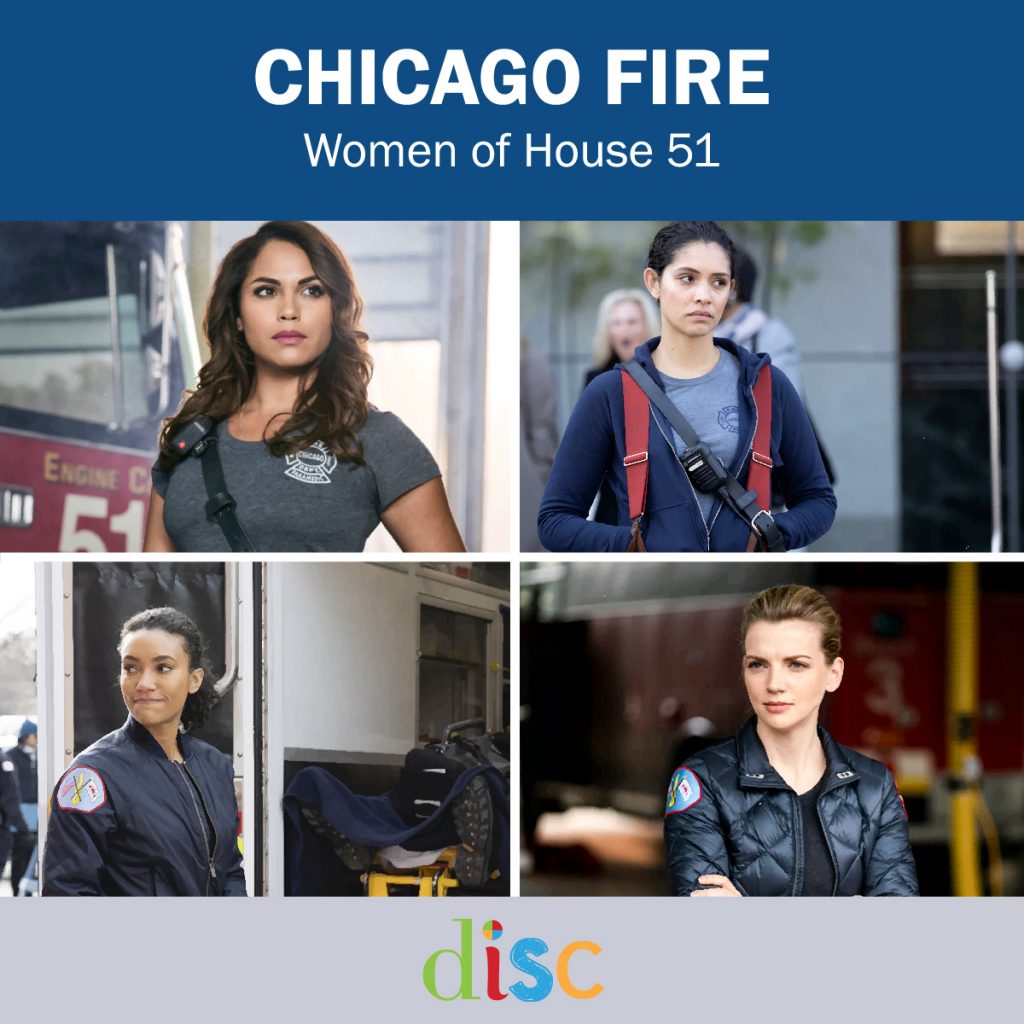 Almost a decade ago, NBC introduced us to the men and women of House 51, a group of Chicago firefighters. Since then we’ve met a number of intriguing characters. As the nature of their fictional job involves a lot of high-stress communication, these characters offer us some great illustrations of DISC profiles in action.

We’ve divided up our dive into the residents of House 51 into two parts, and it is only fitting that we allow the ladies to go first.

Gabriela “Gabby” Dawson: The girl has fire – and an ire that gets lit when she’s referred to as ‘honey’ or ‘sweetie.’  She’s earned her place in House 51. She easily moves between paramedic and firefighter because of her goal and action-oriented motivations. Like many “Ds”, she acts instinctively, hates losing, and asserts her opinion. Gabby will do what it takes to solve and overcome problems – in the ambo, in a burning building, or to keep her foster son safe from harm. She loves deeply – and you’ll never see her give less than 100% in any situation.

Stella Kidd: Stella is always up for a challenge (Mud Run, Otis?) She is super high-energy and loves freely.  You’ll see her giving chances to people who may not always be deserving – all because she believes she can make a difference in their world. Going above and beyond to create the Women Firefighters Mentorship Program is an example of how she thinks big-picture and how she wants to interact, influence and integrate her female community members into achieving something that they couldn’t dream was possible. She has stories from her past that impact her present and she packages them up into ideas that will influence the futures of those she thinks she can help.

Sylvie Brett: This paramedic from a small-town in Indiana is a rare equalizing factor in 51. Her patient and gentle persona paints her as the perfect Florence Nightingale of Ambo 61.  She covers for the erratic-ness of her friends and colleagues because she doesn’t like conflict or confrontation – she is a peaceful zen-like being.  She’s cooperative and is a team player – but she will not compromise more than once. Brett will let you know that you shouldn’t confuse sensitivity with cowardice. The other side of Sylvie is sensual and magical – she’ll go after the man (or the romance novel) that allows her to feel deeply and that is what makes Sylvie Brett such an intriguing character.

Emily Foster: Foster had big shoes to fill as Dawson’s Ambulance 61’s replacement paramedic working alongside Brett. Emily is intelligent and easy-going, but has complexities that challenge her “C-like” motivations. She is an observer – and Emily is always thinking.  When a problem arises – and a problem always arises – she finds a workable solution (Women’s lounge anyone?)  Her ability to focus on facts, details, and contemplativeness creates a force to be reckoned with as she balances her job of paramedic with her dream and ability to be a wannabe med student and doctor.

We’ll be following up soon with a look at the men of House 51. What do you think of this assessment. Let us know in the comments and on social media.

If you've taken either registered for an account with our free assessment or took a paid DISC assessment, you'll be able to retrieve your downloadable … END_OF_DOCUMENT_TOKEN_TO_BE_REPLACED

https://youtu.be/0vC_M82o6m8?rel=0&showinfo=0 In this post, we'd like to discuss a question we wish we would get asked more frequently. How … END_OF_DOCUMENT_TOKEN_TO_BE_REPLACED